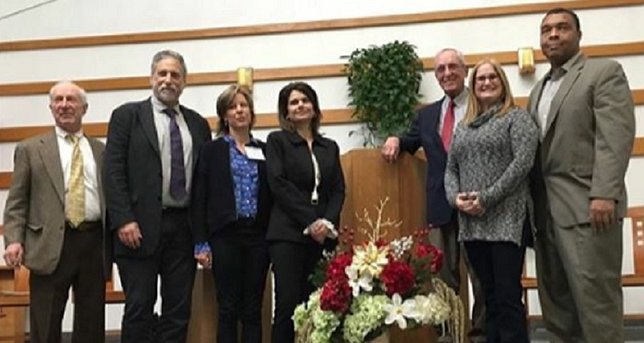 Leg. Spencer and Huntington Town Councilwoman Susan A. Berland with leadership from the EDF and UUFH.

Huntington, NY - December 19, 2016 - The Environmental Defense Fund (EDF), one of the world’s largest not-for- profit environmental organizations, recently celebrated their 50th anniversary with a ceremony at the Unitarian Universalist Fellowship of Huntington. The occasion was attended by nearly 100 residents and numerous leaders from across Long Island, including Legislator Spencer who was delighted to be there to present the organization with a proclamation for their steadfast commitment to preserving and bettering our environment.

'“The Environmental Defense Fund has been on the right side of so many critical issues impacting not just our environment, eco-systems, and wildlife, but human health. I’m proud to be here today to pay a tribute to the past and current members who have lead the way over the past half-century, helping to preserve our natural resources for future generations. Thank you for the fine work that you do on behalf of us all. ” stated Legislator Spencer.

The EDF was born right here in Suffolk County in 1966 when a group of seven local scientists joined together in an effort to protect the dwindling osprey population. Their research and knowledge about the fragility of eco-systems led them to discover that the pesticide DDT was harming many species of birds in our region including the ospreys and our national bird, the bald eagle. After rallying additional support throughout the scientific and legal communities, they successfully brought forth a lawsuit challenging the use of DDT by the Suffolk County Mosquito Control Commission in 1967, which resulted in the banning of the chemical throughout Suffolk County. Eventually due to their effort, was outlawed nationwide. Since those days, the EDF has continued the fight to defend our climate, ecosystems, oceans, and public health. In 1970, their work helped to place all hunted whales on the U.S. endangered species list; in 1985 they championed for the federal government to end the use of leaded gasoline; in 1990 regulators used EDF’s innovative market-based approach when crafting the Clean Air Act to cut air pollution, leading to a 52% drop in acid rain by 2008; and more recently, we’ve seen their efforts help to permanently protect a chain of pristine islands in Hawaii.

To learn more about the EDF’s historic achievements and current work, visit here.