Legislator Kara Hahn this week honored Nolan Adelsky of Setauket for his assistance at the scene of a very serious motor vehicle accident. 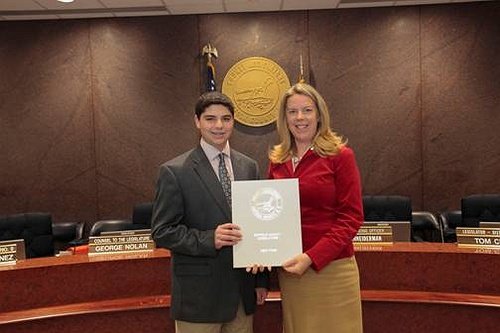 Hauppauge, NY - December 18, 2014 - Legislator Kara Hahn this week honored Nolan Adelsky of Setauket for his assistance at the scene of a very serious motor vehicle accident.

The Robert Murphy Junior High School student was driving with his parents the day after Thanksgiving when, just two cars ahead, a serious crash between a work-van and a SUV occurred at the intersection of Route 347 and County Road 97, flipping the passenger vehicle on its side.  The younger Adelsky and his father, Bart, ran from their vehicle to offer aid to crash victims.  Nolan was one of several good Samaritans to help stabilize the teetering SUV, holding it upright in order to prevent the vehicle from possibly tipping and crushing or amputating the victims’ extremities. Fourteen year old Adelsky also help to prevent the flipped vehicle’s teen-aged occupants from losing consciousness by talking with them until responders arrived.

When asked about the incident and his heroism, Adelsky said, “it was human instinct […] to get out of the car and help out.”