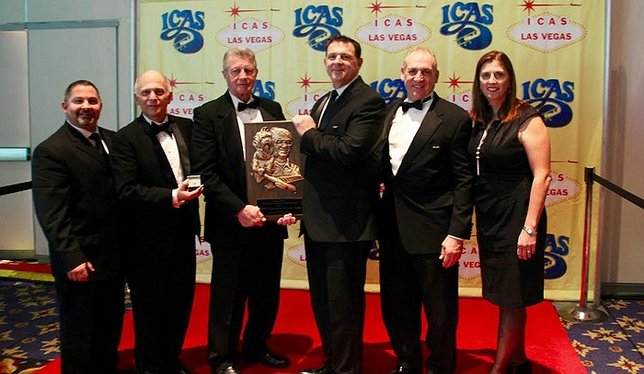 More than 2000 ICAS members from all disciplines of the airshow industry from promoters to operations specialists to performers attended the annual conference.

“Receiving this award was an unexpected surprise,” said Larry Arken, the GEICO Skytypers Squadron commander and flight lead.  “My father purchased our aircraft and began skytyping messages over 40 years ago.  He later started flying air shows performing a basic routine that has now developed into a high-energy, precision-flying demonstration.  He was the consummate showman and would have been very honored by this recognition.”

Each year, the International Council of Air Shows presents the Art Scholl Showmanship Award to the air show act or performer that best exemplifies the qualities of showmanship demonstrated by Art Scholl. Scholl was a long-time and active ICAS member, a renowned aerobatic pilot, and the ultimate air show performer.

Aside from the team’s 18-minute air show demonstration, the GEICO team regularly participates in community events with local schools, youth organizations, veterans groups, and hospitals.  The organization seeks to promote careers in aviation and share the importance of education, personal commitment, and discipline.  During these events, participants in the various air show communities have an opportunity to interact one-on-one with the performers and are frequently able to climb aboard one of the team’s six WWII-era aircraft to experience a piece of aviation history up close.

The GEICO Skytypers also support the air shows through a comprehensive media program designed to promote the team’s appearances through print, online, television, and social media channels.  The team’s signature skytyped messages are often typed prior to their air show demonstration seeking to create stronger awareness for the air show, sponsors and to show support for the US Armed Forces.

During the award presentation, Arken said there were many people to thank, especially the team’s sponsor, GEICO.

“I can’t say enough about how supportive our sponsor, GEICO Insurance, has been during our ten-year partnership,” shared Arken.  “There are so many that contribute to our day-to-day operations including our ground support and maintenance crew, the team pilots, and also our families.  Without their support, we wouldn’t be able to travel 15-16 weekends each year.”

“The Art Scholl Award is the airshow industry’s highest recognition for showmanship,” said John Cudahy, President of the International Council of Airshows.  “In addition to their showmanship, the GEICO Skytypers Air Show Team has become industry leaders through contributions to industry standards for performance, safety and professionalism by a civilian airshow team.”  Past award winners include Bob Hoover, the Canadian Snowbirds, Sean Tucker, Michael Goulian, and Rob Holland.