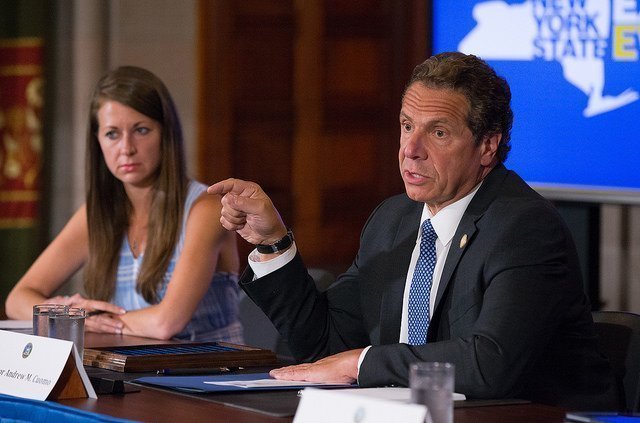 Albany, NY - December 7, 2017 - Governor Andrew M. Cuomo today announced nearly $6.5 million in grants to 55 state-approved anti-sexual assault crisis and prevention programs operated by hospitals, non-profit organizations and governmental agencies statewide. The grants will help fund local crisis hotlines and direct services for sexual assault victims, such as crisis counseling, advocacy and trauma therapy, and support prevention and education in schools, on college campuses and in communities.
"Sexual assault is a scourge on our communities and college campuses and with this funding, we offer vital resources to victims of this heinous crime," Governor Cuomo said. "With this aid, these critically important organizations will be able to improve existing services, establish new programs, and better reach New Yorkers in need of help."
The grants will fund a variety of existing programs, including 24-hour crisis hotlines, crisis counseling, trauma therapy, referrals to support services for both victims and their families, training for advocates, court accompaniment for victims and criminal justice advocacy. In addition, the funding will support community education, training for advocates and sexual assault forensic examiners, and prevention efforts in both community and educational settings, including schools, hospitals and on college campuses. Click here to see a complete list of the funded programs.
"Two years ago, Governor Cuomo enacted the toughest policy in the nation to fight sexual assault on college campuses. Today, we are focusing on prevention and advocacy, providing funding for programs at hospitals, non-profit organizations and government agencies, and getting victims the help they need to recover from this unconscionable crime," said Lieutenant Governor Kathy Hochul. "New York has resoundingly said enough is enough and we are putting our foot down when it comes to sexual assault."
The $6.5 million awarded this week represents funding from three state agencies: a total of $2.8 million from the Office of Victim Services; $2.7 million from the Division of Criminal Justice Services; and $1 million from the state Department of Health. The Division of Criminal Justice Services will administer the one-year grants. To be eligible for funding, programs were required to be approved by the state Department of Health.
Office of Victim Services Director Elizabeth Cronin said, "Sexual assault is a crime that leaves its victims both physically and psychologically wounded. These programs serve as pillars of support for rape and sexual assault victims as they embark on their road to recovery. By providing additional resources to these state-approved programs, our hope is that they will be able to help even more victims as they recover from their ordeal."
Michael C. Green, Executive Deputy Commissioner of the Division of Criminal Justice Services, said, "These grants are providing critical funding that rape crisis programs can use to bolster and enhance their operations. These awards further demonstrate our resolve and the Governor's continued commitment to supporting services and assistance for victims and programs aimed at sexual assault prevention."
Department of Health Commissioner Dr. Howard A. Zucker said, "New York State is leading the fight against sexual violence and the Health Department is proud to support these efforts by working with hospitals across the state to expand access to services for victims of sexual assault. By working together, we can improve responses to sexual assaults and promote prevention strategies to reduce the incidence of victimization from rape or sexual assault in New York State."
The grants continue Governor Cuomo's commitment to combating sexual violence. In 2015, he signed into law the "Enough Is Enough" legislation, which aims to put an end to sexual assault and domestic violence on college and university campuses. Among other provisions, the law provided another $4.5 million in funding for rape crisis programs across the state.
The Division of Criminal Justice Services has a variety of responsibilities, including law enforcement training; collection and analysis of statewide crime data; maintenance of criminal history information and fingerprint files; administrative oversight of the state's DNA databank in partnership with the New York State Police; funding and oversight of probation and community correction programs; administration of federal and state criminal justice funds; support of criminal justice-related agencies across the state; and administration of the state's Sex Offender Registry.
The Office of Victim Services helps individuals and/or their family members who have been victimized through no fault of their own and have no other means of assistance. It is a payer of last resort: all other sources of assistance, such as medical insurance and workers' compensation, must be exhausted before the agency can pay a victim or their family members for any out-of-pocket losses related to the crime. The cost of forensic rape exams, however, is the exception to that payer of last resort requirement. For more information, click here or call 1-800-247-8035.