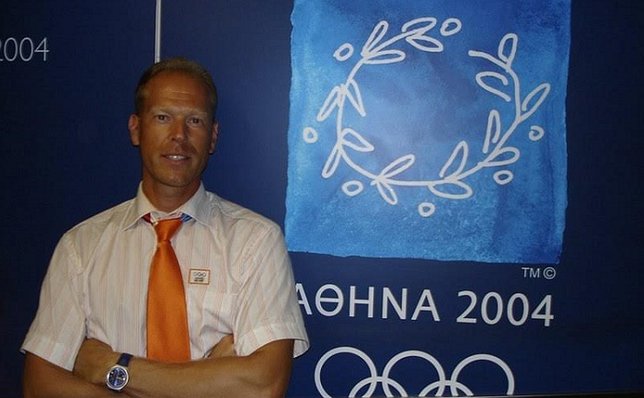 Michiel Bartman at 2004 Olympic games where he won a silver medal to add to his collection of medals won in 1996 and 2000.

Port Washington, NY - August 11, 2016 - Port Rowing welcomes Michiel Bartman as the new Head Coach and Director of Rowing. Coach Bartman brings tremendous experience in both rowing and coaching to the club. He comes to Port Rowing most recently from Harvard University as the Head Coach for the Men’s and Women’s Lightweight teams. While at Harvard, he led them to 4 Eastern Sprints Championship titles and 8 medals at National Championships.

Prior to coaching at Harvard, Coach Bartman was Head Coach at Vesper Boat Club in Philadelphia, one of the oldest and most prestigious rowing organizations in the country. While there, his teams won numerous awards at both the national and international level.

Coach Bartman’s career as an oarsman was both long and distinguished. Born in North Holland, he was a member of the Dutch National Team and won several World Championship medals, a gold medal at the 1996 Atlanta Olympics, and silver medals at both the 2000 Sydney and 2004 Athens Olympic Games.

When asked about Port Rowing, Coach Bartman said, “I am excited to start coaching at Port Rowing! I want to work towards a fun, competitive and exciting environment where the rowers will learn all aspects of rowing. They will develop practice and racing skills, take care of themselves and learn to cope with all that is required to deliver a great team performance on and off the water. Rowing is a great team sport and it gave me so much. I really enjoy now giving it back to other ambitious athletes”.

Coach Bartman joins Port Rowing at a pivotal time in the young club’s expansion. Located at North Hempstead Beach Park, with support from the Town of North Hempstead, the new boathouse is expected to be completed for the Fall rowing season. Port Rowing offers a variety of rowing programs for high school and middle school aged students, adult training and classes, and teens with special needs.

Mitch Tamkin, President of Friends of Port Rowing, comments “With the addition of Michiel to our team, Port Rowing is primed for the next phase of our mission. With the combination of our new boathouse and the quality coaching experience Michiel brings, there is no limit to where Port Rowing can go.”

With Coach Bartman’s leadership, Port Rowing remains committed to the goals of fostering the love of the sport of rowing while promoting good sportsmanship, strong work ethic, leadership skills, team work, and overall fitness for all who want to row.

About Port Rowing
The Friends of Port Rowing is a non-profit organization, which supports the teams, programs, and facilities of Port Rowing. Port Rowing provides competitive rowing teams and training programs for middle school and high school students of all levels. The Port Rowing teams represents high schools throughout the north shore of Long Island. Rowers come from Roslyn, Syosset, Great Neck South, Solomon Schechter, Long Island School for the Gifted, St. Mary’s, and North Shore High School as well as Schreiber High School. Over the past 5 years team members have competed and won on local, state and national levels. Programming for adults include novice and master level training and team competitions.