Last week the nation reached the unacceptable tally of 56 law enforcement officers shot to death so far this year. 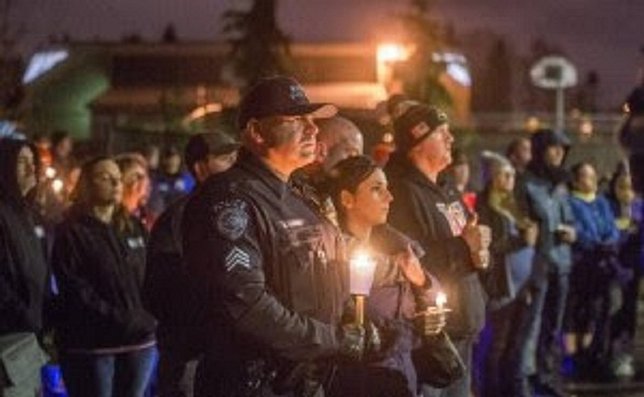 Pictured is the Vigil for Officer Gutierrez of the Tacoma, Washington, police department, killed responding to a domestic violence call.

Photo by: The News Tribune, courtesy of NYAGV.

New York, NY - December 5, 2016 - Last week the nation reached the unacceptable tally of 56 law enforcement officers shot to death so far this year, most when serving a warrant or responding to a domestic violence dispute. New Yorkers Against Gun Violence grieves with the families who have suffered the loss of their loved ones.

The vast majority of shooters wielded illegal guns, reaffirming the urgent need for strong background checks and gun trafficking laws in every state and at the federal level.

In the most recent fatality, Officer Reginald Jake Gutierrez of the Tacoma, Washington, police department, was killed responding to a domestic violence call. The call, during which two children (ages six and eight) were held hostage, ultimately engaged almost 200 law enforcement officers from various agencies.

This sudden spike in police shootings – up 64% from last year — undermines the safety and the security of all Americans. The killing brought to 15 the number of law enforcement officers killed by gunfire in the line of duty during the month of November alone.

Although New York State has some of the strongest gun laws in the nation, those laws are undermined by easy access to guns in other states that are trafficked to our communities. A recent report by New York State Attorney General Eric Schneiderman demonstrates that more than 74% of crime guns found in New York State originated out of state – most from states in the Iron Pipeline (Pennsylvania, Virginia, South Carolina, North Carolina, Georgia and Florida), as well as Ohio.

The NY SAFE Act established tougher penalties for those using illegal guns to commit a crime. But we have to do more to stop the flow of illegal guns and keep guns out of the hands of dangerous people. We need your help to convince a reluctant state legislature and an unfriendly Congress to do their jobs.