Students had the opportunity to hear the powerful testimonies of three speakers. 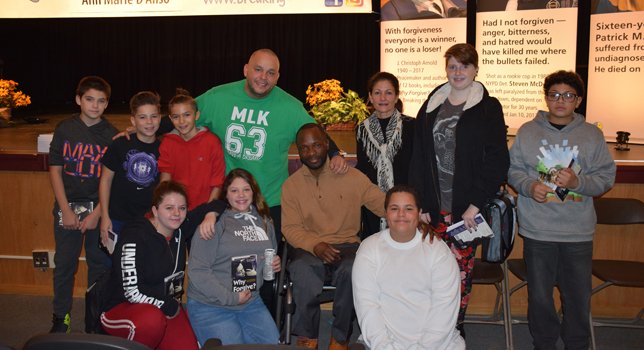 Mastic Beach, NY - December 4, 2017 - William Paca Middle School seventh and eighth grade students recently had the opportunity to welcome representatives from “Breaking the Cycle,” an organization of speakers coming together to discuss their real-life experiences while stressing honest communication and forgiveness as a way of conflict resolution and ultimately healing. Students had the opportunity to hear the powerful testimonies of three speakers – Hashim Garrett, Ann Marie D’Aliso and Sergio Argueta.
“Breaking the Cycle allowed our students to hear real-life accounts of life-altering experiences,” said Dr. Michele Gode, Principal, William Paca Middle School. “It was evident by their reactions, including their tears, that they were moved by each of the speakers. It is my hope that our students learned that no matter what they have experienced in life, it is never too late to change for the better.”
Hashim Garrett recounted to students his personal story of growing up in Brooklyn and witnessing his mother being abused by her boyfriend and how this eventually started to change his demeanor and his anger multiplied. He detailed how he went from being afraid to being the one to fear by joining a gang. Then at 15-years old, he was betrayed by his “friends” and shot six times in a gang-related shooting, causing him to become partially paralyzed from the waist down. He recalled how this experience began to change him and he was eventually willing to forgo revenge for forgiveness. “It is easy for us to love those who love us, but the true challenge is to love those who are unkind to us,” Mr. Garrett said.
Ann Marie D’Aliso shared the story of how her 16-year old son, Pat, who seemingly had everything going for him, was suffering from undiagnosed depression and took his own life 13 years ago. She shared the importance of positive communication and being kind to others. “Suicide is a permanent solution to a temporary problem,” she said. “So think before you send that unkind text or comment.” By sharing the painful story of her son’s death, Mrs. D’Aliso hopes that she can help others be saved.
Each assembly closed with powerful words from Sergio Argueta, founder and president of S.T.R.O.N.G. Youth, Inc. (Struggling to Reunite Our New Generation), who shared how he lost two friends to gang violence and another to jail during a one-year period when he was 17, which served as a wake-up call to him. Since then he has dedicated much of his time sharing his story and showing others that forgiveness and making good choices is how to break the cycle of violence.
Breaking the Cycle also provided a copy of the book, “Why Forgive?” by Johann Christoph Arnold, a book about ordinary people whose lives have been scarred by violence, who refused to let hatred control their lives. The book and the assembly were provided free of charge.