For the second consecutive year, at a race in Lake Placid, the team jumped onto the podium on home ice Friday. 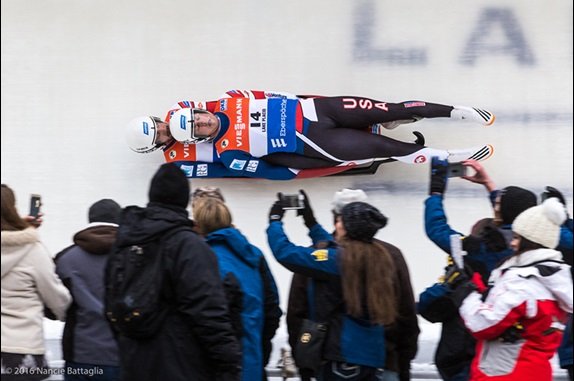 No place like home for USA Luge as West wins, Mortensen/Terdiman silver.

Lake Placid, NY - December 2, 2016 - Members of the USA Luge team wait each summer with great anticipation for the release of the Viessmann World Cup schedule. They look for the Lake Placid and Park City dates, and with good reason.

A year ago, the team scored six medals in Lake Placid, three of them gold, and five more in Park City a week later.

For the second consecutive year, at a race in Lake Placid, the team jumped onto the podium on home ice Friday as Tucker West grabbed a scintillating gold medal in singles, while the doubles team of Matt Mortensen and Jayson Terdiman ended a six-year U.S. medal drought in the discipline as they opened the two-day program with a silver medal.

“The track was built beautifully all week, which was exciting to come back to,” said West, of Ridgefield, Conn. “I really feel at home here. I was a little nervous. It’s always nerve-wracking to race before your friends and family, but I was able to perform and couldn’t ask for anything more.

“That was great racing. I wish I could have pulled ahead a little more, but a win’s a win. I think 2012 was the closest race I had. Chris (Mazdzer) and I tied for the Norton National Championships after four runs to the thousandth of a second. This is probably the second closest.”

The performance of Mortensen and Terdiman brought back memories of historic doubles success for USA Luge. The organization’s first four Olympic medals were in the discipline, produced eight World Championship medals and three overall World Cup titles. There was even a USA podium sweep of the doubles in Lillehammer 20 years ago.

Those achievements came similar to the manner that Mortensen and Terdiman displayed Friday morning, which was a pair of solid runs. Today only Germany’s Toni Eggert and Sascha Benecken were better.

This U.S. result was also historic on several fronts: the last doubles medal was almost six years ago to the day, ironically, in Winterberg, and with Terdiman in the back of the sled with Christian Niccum. And for the 30-year-old Mortensen, a U.S. Army sergeant whose career spans 19 years, it was his first career doubles medal.

Now in their third year together, Mortensen and Terdiman, a doubles team since March 2014, are right on schedule with their four-year plan.

“The first year was about going around and learning the tracks together as a team,” said Mortensen, of Huntington Station, N.Y. “The second year was about consistency, getting a top-five overall (World Cup), which we did. This year is about getting a medal. It was not about consistency. It was about going as fast as we can at every individual race and making sure we put ourselves in contention, then to see what’s too much and where we should draw back. It’s great to do this in the second World Cup.”

It was nearly achieved last season in Sochi where they held the first run lead, only to make a crucial mistake entering the finish curve and finishing out of the medals.

“We used the Sochi experience to prepare ourselves to be in this position again and it worked out to our advantage,” stated Terdiman, of Berwick, Pa. “Last year we got hyped up and were really going for it, which is something we don’t normally do. We like to play things safe and ride the correct lines. That really bit us in the butt last year. Today we continued to maintain composure and had a great second run.”

German teammates Robin Geueke and David Gamm posted 1:28.726 in collecting the bronze medal and their third straight World Cup podium. It’s the first three of their budding careers, including a third place in the sprint race of last Sunday. They have 225 points.

West shook off the disappointment of a disqualification last week at the World Cup opener in Winterberg when he was overweight. He righted himself on home-cooking and won in Lake Placid for the second time in the last three years.

“Anytime you can get on the podium it’s a huge confidence boost,” he continued. “The speed is there. Hopefully we can continue this through the next World Cups and even the World Championships. The goal is to continue this momentum, take advantage of these North American World Cups. We always do well here. We have more training than most other people.”

The victory was by just 0.006 of a second over Russian Semen Pavlichenko, in which West’s second run time moved him in and out of first place. The gold medal was in doubt until the moment West stopped the finish light in 1 minute, 43.088 seconds. His first trip of 51.448 seconds gave him the intermission lead; while a closing 51.640 was fourth best, but good enough.

Pavlichenko was timed in 1:43.094, while Austrian Wolfgang Kindl, the 2008 junior world champion on this course, scored the Lake Placid bronze medal for the second consecutive year. Kindl was only 0.094 from West.

Mazdzer was fourth on the afternoon, just 0.04 of a second from a third U.S. medal. The clock was not kind to the Saranac Lake, N.Y.  racer, as his runs were the third and second fastest, respectively, but his total put him just off the podium.

“In the first run I was leading until I messed up out of curve 12,” remarked the two-time Olympian. “It was all there. I just made a few little mistakes. Sometimes little mistakes don’t cost you that much time. This time it did.”

A year ago, he won this race on the way to a third place overall World Cup placing.

“In the past, I’ve done well so that gives me a lot of confidence. It’s tough being the person that people are gunning towards, but at the same time I have to believe in myself and I know I can achieve results. Even though the first two World Cup weekends weren’t what I was hoping for, we have a lot to work on still. We’re 14 months out from the Olympics and we have to look at it that way, where can we grow from here to the Olympics.”

The German luge machine was conspicuous by its absence in the singles event. They occupied sixth through ninth places, bookended by double Olympic champion Felix Loch, sixth, with Winterberg winner Johannes Ludwig, ninth.

They took some solace in leading the overall standings as Loch has 210 World Cup points, followed by Ludwig’s 209. Mazdzer and West are currently 10th and 11th, respectively.

The Lake Placid races conclude Saturday with women’s singles and the Viessmann team relay World Cup presented by BMW, all kicking off at 9:30 AM ET.