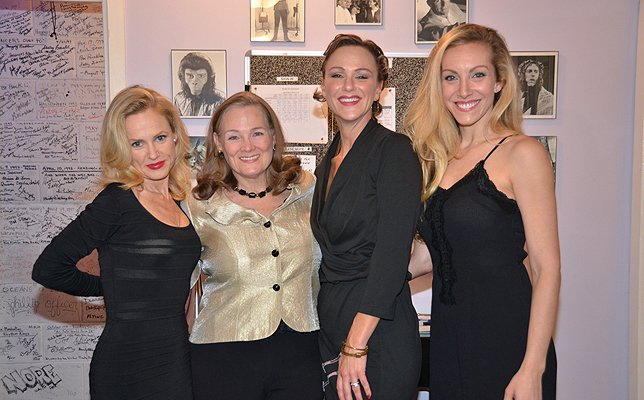 The ladies of DOAS.

Sag Harbor, NY - November 14, 2017 - Bay Street Theater and Sag Harbor Center for the Arts is proud to present this year’s Literature Live! production of Death of a Salesman, by Arthur Miller; directed by Joe Minutillo The opening night took place on Saturday, November 11. Prior to the show there was a patron reception at The American Hotel. Upcoming public performances are Thursday through Saturday, November 16, 17, 18,  and Thanksgiving weekend November 24-25 at 7 pm. Matinee performances will be on Saturdays, November 18, 25 at 2 pm. Tickets are available online at baystreet.org, or by calling the Box Office at 631-725-9500.
Death of a Salesman, considered to be one of the greatest plays of the 20th century, is a Pulitzer Prize and Tony Award winning play written in 1949 by the renowned American playwright Arthur Miller. Set in the late 1940’s, Death of a Salesman follows Willy Loman, a failing salesman, and his family as they face the harsh reality of their lives that they have been denying. As Willy spirals into mental disarray and fails to achieve his own dreams, he criticizes his son Biff for not being successful. As Biff faces his own disappointments, he confronts the family on his father’s unrealistic expectations for him and his inability to face the truth about their lives. Ultimately, Miller explores themes surrounding the uncertainty of the American Dream and the struggles that families face in the wake of a changing economy, both of which are as contemporary today as when the play was written.
Joe Minutillo will be directing the production and has previously directed the Literature Live! productions of The Diary of Anne Frank, To Kill A Mockingbird, Of Mice and Men, and last year’s production of  The Scarlet Letter.
The production team includes Michael Holland (Original Music), Mike Billings (Set/Projection/Sound Designer), Dalton Hamilton (Lighting/Projection/Sound Designer), Melanie Clifton Harvey (Costume Designer), Andrew Diaz (Props Designer), Meg Murphy (Hair/Wig Designer), Denise Yaney (Production Stage Manager), and Kelsy Durkin (Assistant Stage Manager).
The cast includes: David Manis (Willy Loman) The Curious Incident of the Dog in the Night-Time and War Horse on Broadway, and The X-Files on television; Carolyn Popp (Linda) Miss Maudie in To Kill a Mockingbird at Bay Street Theater; Sonia in Vanya and Sonia and Masha and Spike; then M'Lynn in Steel Magnolias; Rob DiSario (Biff) Kenneth in The Night Alive, Guild Hall, John Proctor in The Crucible and William in Men's Lives, Bay Street Theater; Scott T. Hinson (Happy) Men's Lives and To Kill a Mockingbird at Bay Street Theater; Michael Joseph Jason John (writer/director) coming soon to film festivals; Willy Cappuccio (Bernard/Stanley) Of Mice and Men, Bay Street Theater; To Kill a Mockingbird, Bay Street Theater; Life x 3, Thailand; Keith Cornelius (Ben/Howard) Otto Frank in The Diary of Anne Frank at Bay Street Theater; Boo Radley, Mr. Cunningham, and Judge Taylor in Too Kill a Mockingbird at Bay Street Theater; Uncle Drosselmeyer in The Nutcracker at Hampton Ballet Theatre; Chloë Dirksen (The Woman), The Scarlet Letter, Bay Street Theater; This Wide Night, Guild Hall; To Kill a Mockingbird, Bay Street Theater;  Rachel Feldman (Jenny/Letta) Yelena in Uncle Vanya at Guild Hall; Frankie in Frankie and Johnny in the Clair de Lune at the Bridge Theater; Gravid Water at the Upright Citizens Brigade (UCB); Tina Jones (Miss Forsythe) How I Learned to Drive, Berkley Repertory Theatre; Arcadia, American Conservatory Theatre; The Real Thing, Broadway; Neal Mayer (Charley) Broadway: Les Misérables, National Tour of Priscilla Queen of the Desert, and U.S. Premiere and Studio Cast Recording of The Hunchback of Notre Dame.
Literature Live! is presented to the general public but also for school groups who attend performances for free. This is made possible by Century Arts Foundation and the Bay Street Board of Trustees who have launched a $100,000 Matching Grant Challenge to fund the program. Other support comes from the Andrew Sabin Family Foundation, Colgate-Palmolive Company, The Dana Foundation, Irvin Stern Foundation, Sunny & Abe Rosenberg Foundation, Sag Harbor Youth Committee, Ship to Shore Marina, Theatre Venture Inc., Town of Southampton, and numerous individual donors.
Media sponsors are Dan’s Papers, WBAZ, WEHM, WLNG.
Bay Street Theater & Sag Harbor Center for the Arts is a year-round, not-for-profit professional theater and community cultural center which endeavors to innovate, educate, and entertain a diverse community through the practice of the performing arts. We serve as a social and cultural gathering place, an educational resource, and a home for a community of artists.