William Andrews is a 64-year-old missing vulnerable adult with dementia and may be in need of medical attention. 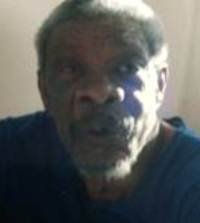 Hempstead, NY - November 14, 2014 - At the request of the Nassau County Police Department, a New York State Division of Criminal Justice Services Missing Vulnerable Adult Alert has been issued relating to the disappearance of William Andrews; age 64; from Hempstead, NY on November 13, 2014 at 7:30 p.m.

William Andrews is a 64-year-old missing vulnerable adult with dementia and may be in need of medical attention. He was last seen leaving Nassau University Medical Center at 7:30 p.m. on Thursday, November 13. William is believed to be on foot and was last seen wearing blue jeans, white sneakers, a green jacket and a brown baseball hat. He may travel to Roosevelt or Brooklyn, New York. William is 5' 11", black male who weighs 200 pounds, has gray hair and brown eyes.

If you have any information about the wearabouts of William Andrews, please call the Nassau County PD Missing Person Registry Unit at 516-573-7374, or call 911.