The iconic parade celebrates its 90th year in 2016 with an incredible roster of live performances, signature floats, and stunning character balloons! 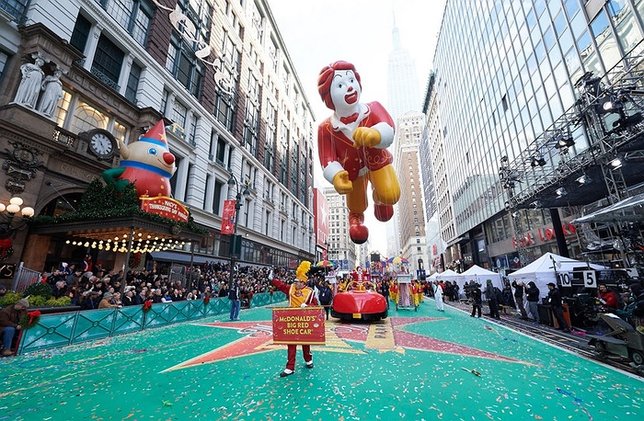 With the 90th Annual Macy's Thanksgiving Day Parade almost upon us, millions are preparing to watch the spectacle from the comfort of their homes and the chilly streets of Manhattan! The parade's origins are humble, with an event in 1924 featuring costumed Macy's employees, live entertainment, and the iconic first appearance of Santa Claus. A beloved yearly tradition that is enjoyed by Americans across the country, the only instances where a Thanksgiving came and went without a parade were 1942-1944 due to the need to conserve resources for World War II.

The action begins at 9 AM on Thursday, November 24th at the starting point on West 77th Street and Central Park West. The parade will travel alongside Central Park, make a turn at Columbus Circle, and then take Central Park South to 6th Avenue. From there, it's a straight run to 34th Street, where the parade will make one final turn to end at Macy's Herald Square.

A massive lineup of entertainment is scheduled to participate in the 2.5-mile march to Macy's flagship store. 16 gigantic balloons, 27 novelty balloons/ballonicles/trycaloons, 26 floats, 16 marching bands and performance groups, 1,100 cheerleaders, 1,000+ clowns, and dozens of live performers and stars will be featured throughout the event.

The list of live performers that will be showcased during the event is equally as star-packed thanks to appearances by Tony Bennett, Kelsea Ballerini, Fitz & the Tantrums, Aloe Blacc, Easton Corbin, Christopher Jackson, Maddie & Tae, and a number of NHL legends and U.S. Olympic Gold Medalists, among countless others. Plus, with performance ensembles from West Virginia to Hawaii, and displays by the Kilgore Rangerettes and National Dance Institute stars, the sheer variety of performers guarantees enjoyment for all ages.

NYPD Commissioner James O'Neill has also announced a series of additional security measures to ensure that New Yorkers remain safe while enjoying this year's parade. In addition to traditional police officers, a series of specialized teams will also be present at the event to provide families with the peace of mind to fully enjoy the holiday spectacle.

Looking to watch the parade live instead of on TV? Check out the LIRR schedules before departing. Plus, don't forget to watch "The National Dog Show Presented by Purina®," which will air on NBC directly upon the conclusion of the parade!