Farmingdale's former "Fun Zone" gets a new coat of paint and an exciting new direction sure to please both kids and their parents. 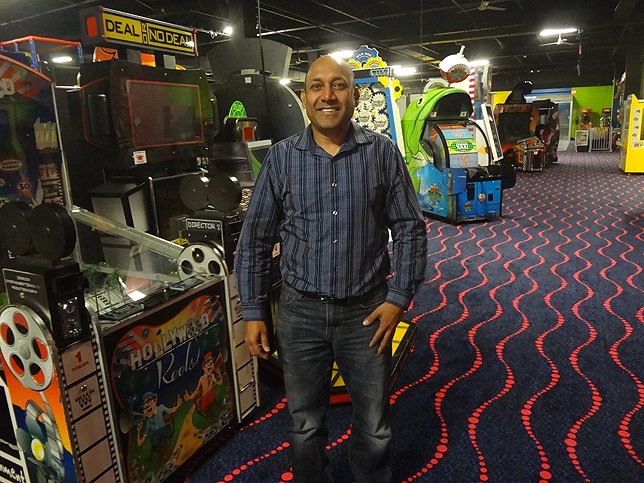 For anyone familiar with popular entertainment in the Farmingdale area, the words “Fun Zone” should sound quite familiar, as the popular family establishment – complete with an on-site Nathan’s fast food restaurant – has been a fixture on the busy Route 110 for nearly 20 years.
However, with changing attitudes in terms of children’s entertainment comes new ownership, a new attitude, and, most importantly, a new name: @Play Amusements, which is a brand to keep your eye on as it throws some fresh, exciting new ideas into a old formula.
Owner and Queens resident Anil Sawant has an extensive history in the food and restaurant industry; however, @Play Amusements represents his first foray into the world of entertainment. Though, when it comes down to it, @Play is a business much like any other, and if there’s one thing Sawant knows how to do, it’s run a business.
“I’ve been doing this for over 20 years,” he said. “I own a number of restaurants, with some being very well-known franchises and some being independent establishments…I have a lot of experience in running successful businesses.”
Sawant had actually been running the Nathan’s location in the Fun Zone building for the past six years, and when the opportunity arose to acquire the adjoining entertainment complex as well he said that he was very interested.
“I had Nathan’s here for a while…we sub-leased the front of the building while the previous owners of Fun Zone leased the back,” he said. “When the opportunity extended itself, I actually bought the entire building and own the whole thing now.”
Given his keen business acumen, Sawant recognized that the general landscape of entertainment has changed in the years since Fun Zone first opened its doors; noting that he faces competition from the advanced home videogame systems as well as the changing tastes of the modern child, Sawant said that his new venture  must evolve to not only survive, but to thrive.
“Fun Zone was very well-known, and had been here for almost 20 years, but things have changed since the recession hit, as have people’s attitudes towards arcade games…people are playing more and more at home. I had to make some changes,” he said. “We’re now targeting kids 13 or 14 and under…we will still have arcade games, rides and birthday parties, but it’s about being kid-friendly and educational. We’re currently only open Friday, Saturday, and Sunday, but we’re going to start some after-school programs as well to make this place viable during the week.”
Drawing upon a background in education and children’s extra-curricular activities that caters to low-income families, Sawant said that some of the after school programs he wishes to implement at @Play Amusements include math and technology instruction, run in conjunction with local area school districts and parents. Summer-specific programs may also be in the works, he added.
But that’s not to say that there’s no room for good old-fashioned fun and games as well; Sawant highlighted arcade games, bumper cars, and rides (including inflatable bouncy houses) are still available, and new additions include a kid-friendly dance room (with a DJ and costumed characters) and a re-vamp of the facility’s popular Laser Tag arena with all new amenities that are sure to add a new level of strategic fun.
“It’s an interactive Laser Tag…basically, it fights back,” he said. “It’s a lot of fun [for] people of all ages, children, teens, and even adults.”
Likewise, his on-site Nathan’s franchise is also evolving…to the point that it might not even be a Nathan’s anymore, he said.
“We’re renovating the restaurant and we’re re-vamping the menu, adding some healthy choices…sandwiches, salads, and soups in addition to more typical fare such as hot dogs and hamburgers,” he said. “I’m not quite sure if it’s still going to be a Nathan’s anymore, mainly because there’s a conflict now…if I want to bring in these healthy choices, people don’t perceive us as a healthy meal choice if we have a Nathan’s sign hanging out front. So, if we don’t stick with Nathan’s we’re going to have to come up with a new name.”
The new restaurant should be open within the next several weeks, Sawant said.
Acquiring the entire building and its assets was a bit of an uphill battle for Sawant, especially when it comes to dealing with the Town of Oyster Bay; whereas the previous owners were required to renew their permits on a regular basis in order to continue to operate the business, as a new owner, Sawant was required to submit and gain approval for all of his permits from scratch. However, he credits the Town for keeping a potentially complex process running as smoothly as possible.
Keeping @Play Amusements firmly rooted in what works with a keen eye on the future is what Sawant said will re-invigorate the business, and provide both an engaging, beneficial, and family-friendly outlet for kids to come on down and have a great time.
“So, if you tie down these things – education, entertainment, food, healthy offerings – then I think it works,” he said. “That’s the vision, and I think that it will be both fun and successful.”