Increased rail capacity will reduce crowding on trains, subways and in Penn Station. 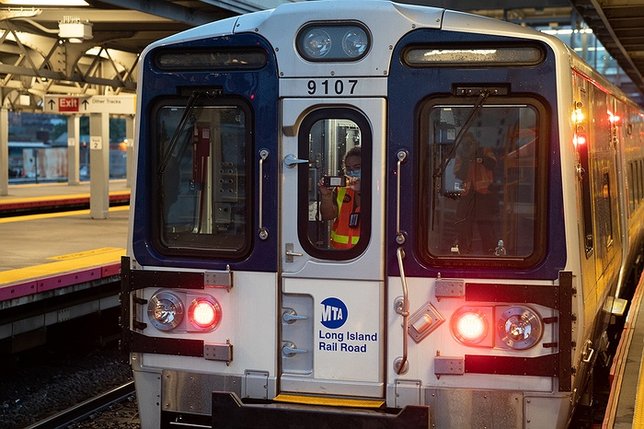 Governor Kathy Hochul recently joined the Metropolitan Transportation Authority (MTA) to take a special Long Island Rail Road (LIRR) test train to Grand Central Terminal and gave the public one of the first-ever looks at the new 350,000-square-foot East Side Access passenger terminal there.
This is the largest new train terminal to be built in the United States since the 1950s and the first expansion of the LIRR in more than 100 years. Together with the LIRR third track project, the new connection will add 50 percent to the LIRR's capacity into Manhattan with up to 24 trains per hour and cut travel time for Queens and Long Island commuters traveling to the east side by 40 minutes per day.
It will also reduce crowding on commuter rail, at Penn Station and on the subway by dispersing commuters and allowing passengers to go directly to Grand Central Terminal from destinations across Queens and Long Island. The new commuter rail route and concourse officially open in December 2022.
"The East Side Access concourse is a model for modern transportation systems as we look to the post-pandemic future," Governor Hochul said. "As the first modern train terminal to be built in more than a half century, the East Side Access concourse will expand rail service, cut down on travel times into East Manhattan from Queens and Long Island, and reduce crowding. This is yet another example of New York leading the way as we recover from the pandemic, and I look forward to the East Side Access concourse and route fully opening in December 2022."
MTA Acting Chair and CEO Janno Lieber said, "The East Side Access project will deliver faster, direct service for Long Island and Queens commuters to the East Side of Manhattan, the densest job hub in North America. This smart, transit-oriented developmentwill help spur economic growth, provide better connections to Metro-North Railroad and lead to reduced automobile traffic and improved air quality in the region."
LIRR President Phil Eng said, "It is perfect synergy that we have Governor Hochul here today as she leads the charge to improve and innovate New York's future and the MTA is ever closer to ushering in a new chapter in LIRR history.I'm thankful for her leadership and proud of LIRR's role in helping to deliver the East Side Access Project providing new service to Grand Central Terminal for all of Long Island. In 2022, not only will we provide more options for our riders to the East Side of Manhattan, but we will be giving them a state-of-the-art facility beneath the existing Grand Central Terminal. The LIRR continues to be a leader in reducing pollution and stimulating New York State's economy by getting people out of their cars and back to work across Long Island and New York City."
The East Side Access concourse at Grand Central Terminal includes a 350,000-square-foot LIRR passenger concourse just below street level that will offer new entrances along Madison Avenue, 25 retail storefronts,WiFi and cell service, new art installations anddigital signage with real-time train information. The entrance at347Madison Avenue being built at 45th Street as part of the redevelopment of the MTA's former headquarters alone is expected to serve 10,000 people a day.
Seventeen hi-rise escalators, 182 feet in length and the longest in the MTA system, will connect commuters between the new world-class concourse and mezzanine of the train terminal 140 feet below Park Avenue.The mezzanine in turn leads to an upper train level that has two platforms and four tracks, and a lower train level that similarly has two platforms and four tracks.
Trains will enter the concourse from a newly activated tunnel that carries two tracks as it passes under the East River at 63rdStreet. The two tracks then fan out to four, then eight on the two levels.
In Queens, crews have built a new yard with space for up to 300 rail cars, and fully updatedHarold Interlocking, the busiest passenger railroad intersection in North America, including the installation of97new track switches, 295 poles that carry overhead wires used by Amtrak, five new steel railroad bridges, and 8,445 feet of retaining walls. Overall, the project includes more than 40 miles of new track, nearly 13 miles of newly excavated tunnels, 44 ventilation fans, 550 miles of cable and 975 security cameras, 15 overhead gantries that display train control signals, and 14 huts alongside the tracks containing signal system components.
Originally conceived of in the 1960s, the project was developed in the 1990s with work beginning in earnest in Queens and Manhattan in 2006. East Side Access contractors have accomplished several engineering feats over the years, including blasting under Grand Central Terminal with limited impact to rail operations, mining under both Northern Boulevard and the elevated and underground subways in Queens and expanding the capacity of Harold Interlocking.
In addition to relieving congestion at Penn Station, East Side Access will enhance New York's competitive standing in the global economy by providing a new link to business centers on the East Side and supporting job growth around Grand Central Terminal. When the project is complete, operational efficiency through Harold Interlocking will be greatly improved, benefiting travelers all along the Northeast Corridor. For the first time, ADDRD tracks will make reverse commuting from New York City to Long Island a realistic option for the region and will allow East Midtown and Metro-North Railroad customers to be able to connect to JFK Airport via the Long Island Rail Road and the Jamaica AirTrain.