Rare Solar Eclipse Will Be Visible on Long Island This Weekend

The eclipse will take place in the early morning hours of Sunday, November 3. 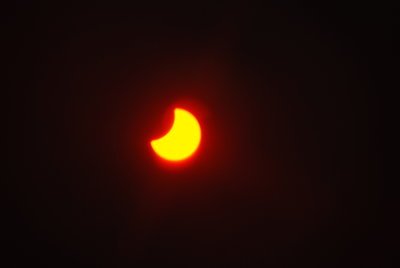 Further west in the U.S. and Canada, the eclipse will nearly be over at sunrise. It will not be visible passed Ontario, Ohio, Kentucky, Tennessee, Alabama, and the Florida Panhandle. For New Yorkers, this is truly a rare treat - it's not often that Solar Eclipses are viewable locally in the region.

Be safe when viewing an eclipse. According to NASA the sun can only be viewed for a few seconds during a total solar eclipse. Partial eclipses, annular eclipses, and partial phases of total eclipses are never safe to watch.  Even when 99% of the Sun’s surface is covered, the tiny part that is shining can severely damage your eye.

The Sun can only be viewed directly with specially designed filters which have a thin layer of aluminum, chromium, and silver deposited on the surfaces. Filters unsafe for viewing the eclipse include color film, some non-silver black and white film, medical x-ray films, smoked glass, photographic neutral density filters, and polarizing filters.

One of the best filters to view the sun is a number 14 welder’s glass which is available at welding supply outlets. Another popular alternative is aluminized Mylar. Mylar can be cut with scissors and shaped into any kind of box for your viewing device.

NASA warns eclipse watchers to be careful when enjoying the eclipse, and offers up some tips and tricks for your viewing pleasure, which you can view here.