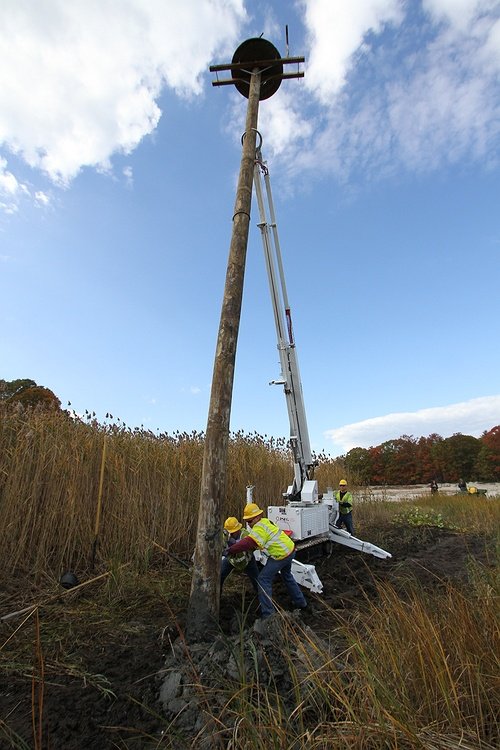 Kings Park, NY - October 30, 2014 - In balancing its commitment to the consistent, safe delivery of power for its customers with its commitment to being a good environmental steward, PSEG Long Island has collaborated with the New York Office of Parks, Recreation & Historic Preservation to install a new osprey nesting pole and platform at the Nissequogue River State Park in Kings Park, NY.

“We recognize the importance that Long Island’s osprey population has on the overall ecology of the area,” said John O’Connell, vice president of transmission and distribution, PSEG Long Island. “Anything we can do to ensure that the osprey continue to return to the area, year after year, while at the same time continuing to deliver 99.9 percent electric reliability, is a win-win.”

Two years ago, during Superstorm Sandy, one of the nesting poles in Nissequogue River State Park was damaged. Eager to have the pole and platform restored before next year’s nesting season, the Parks Department recently contacted PSEG Long Island for assistance.

“NYS Parks mission is to balance patrons’ recreational activities with the protection of our natural resources. Replacing the damaged pole and platform does both of those beautifully,” said Wayne R. Horsley, Regional Director, Long Island State Park Region. “Ospreys are a favorite among park patrons and the project will provide another nest site for the NY State ‘Species of Concern.’ Parks appreciates the willingness of PSEG Long Island to restoring a nesting platform to NRSP.”

The replacement of the damaged pole and platform provides a safe nesting area for the osprey away from vital electrical infrastructure, helping PSEG Long Island maintain strong electric service reliability. Ospreys will often use utility poles and transmission structures for nesting, which jeopardizes system reliability, causes outages and damages equipment. Such nesting also puts the birds in danger of electrocution, as their large wingspan can complete the circuit between closely spaced energized equipment or between an energized wire and a neutral ground wire.

Long Island is home to many species of birds, including the majestic osprey. Ospreys are large, beautiful birds and a popular sight on Long Island. From the 1950s through the 1970s, Long Island’s osprey population decreased and became endangered. The effort to build safe nesting sites on or near waterways has contributed to the rise in the population of osprey.