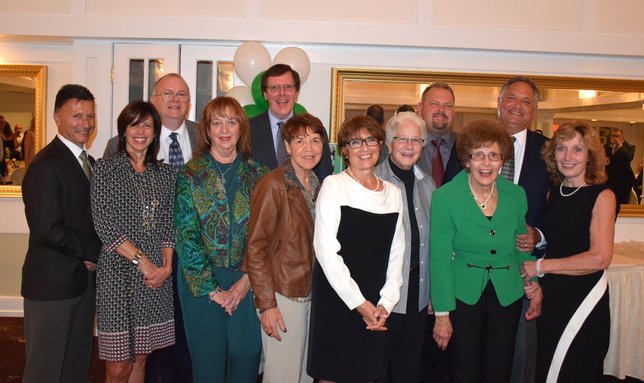 “As teachers Beth, Candy, Mary and Stephen provided the encouragement and inspiration for their students to be curious and to question,” said Jackie (Intonato) Eglevsky ’64, President, William Floyd Alumni Association. “They all valued their students’ individuality and creativity and provided them with knowledge and guidance to go forth into the world and to inspire others,” she said.

“The Outstanding Educators Award is truly unique as it entails former students nominating an educator that has meant so much to that person in school and in life,” said Kevin M. Coster, Superintendent of Schools, William Floyd School District. “In my opinion, there is no greater recognition an educator can receive than that of a former student. I congratulate Beth, Candy, Mary and Stephen on this recognition and thank the William Floyd Alumni Association for hosting such a wonderful program.”

Mrs. Eglevsky added, “I am positive that the students taught by our four honorees are eternally grateful that they were lucky enough to have had such inspirational teachers who taught them to experience the joy of learning.”

The Honorees
Mary Arslanian was a French teacher at William Floyd High School who was instrumental in establishing a French Club and the Foreign Language Honor Society (French, Italian and Spanish). She also organized a number of trips to France and Canada during spring vacations, as well as day trips to New York City to see Les Misérables on Broadway. She was nominated by former student Catherine Singleton ‘90.

Candy Carro taught for 37 years at Tangier Smith Elementary School with a mission of empowering all of her students to be thoughtful literacy learners. She was nominated by James Evans, ’11.

Beth Cutrone began her teaching career at Moriches Elementary School in 1977, and continued at John S. Hobart Elementary School when it opened in 1981, where she is still helping to shape young minds today. She was nominated by Ryan Elliot, ‘95, Vice President, William Floyd Alumni Association.

Stephen Stengel began his teaching career at William Floyd in 1976 with the course, Consumer Education. He is a former Suffolk County and Business Association of New York State “Teacher of the Year.” He was nominated by Harold L. Dieters, III, ’89.

Please click here to view a photo album of the event.