A gym teacher used his cellphone to record girls in a middle school locker room. 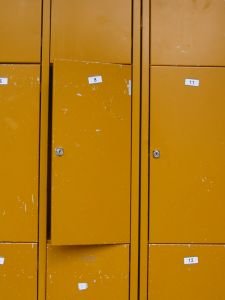 District Attorney Spota said he will recommend Thomas Sheppard be imprisoned to the maximum one and one-third to four years imprisonment at sentencing on December 18.
“The successful investigation by this office, the New York State Police at Riverside and police from the Village of Westhampton Beach, prompted by Westhampton Middle School officials’ report of suspicious activity on February 26 of this year in the Middle School’s locker room, resulted in the defendant’s arrest by State Police in March and his indictment in April,” DA Spota explained.  “It was clear to us from the beginning the recording of these girls was not inadvertent as the defendant first claimed.”
“His appalling betrayal of these teenagers will also result in the surrender of his teaching license,” DA Spota said.
Sheppard pleaded guilty to one felony count of unlawful surveillance in the second degree, and seven counts of endangering the welfare of a minor.
The court is expected to sentence Sheppard, 28, to five years of probation.  Judge Barbara Kahn also directed the defendant register as a sex offender.