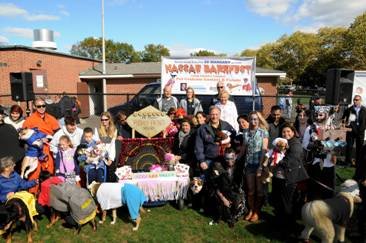 Many participants also helped families with pets who are facing difficult financial times by donating pet food at the event. Many rescue groups and animal friendly organizations were on site to celebrate and some lucky four legged friends actually were adopted that very day from the various organizations.

“I want to thank everyone for coming out to our Second Annual Nassau Barkfest,” said County Executive Mangano. “I also want to thank our sponsors - Nassau SPCA and Long Island’s K98.3 - for their generosity. For many of us our pets are members of our family and this was a great way to enjoy a nice afternoon together.”

Mangano continued, “I would like to thank the many rescue groups that came to Barkfest and continue day in and day out to help animals in need like North Shore Animal League, FurBabies Rescue, The Town of Hempstead Animal Shelter, Last Hope, Bobbi and the Strays, The Shelter Connection (Town of North Hempstead), Road to Home Rescue Support, Echo Dogs White Shepherd Rescue, Long Island Golden Retriever Rescue, Bumper Bulldog Rescue and Pit of Our Souls Rescue.”