Tune into The Sounds of Film to hear interviews with Hamilton’s Daveed Diggs, Get Out’s Daniel Kaluuya and Jordan Peele, and Sideman: Long Road to Glory’s Scott Rosenbaum and Scott Sharrard. 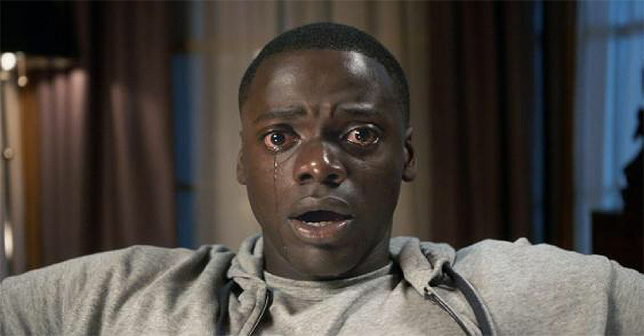 Daniel Kaluuya in Universal’s Get Out.

Stony Brook, NY - October 19, 2017 - This Thursday’s The Sounds of Film on WUSB will feature exclusive interviews by Tom Needham from the recent Hampton’s International Film Festival with Get Out’s Daniel Kaluuya and Jordan Peele, and Hamilton’s Daveed Diggs.  Also on the program are the director of Sidemen: Long Road to Glory, Scott Rosenbaum, and musician Scott Sharrard, widely known as the lead guitarist and musical director of the Greg Allman Band.
The critically acclaimed film Get Out is the most profitable film of 2017.  Tom Needham had the unique opportunity to speak with the celebrated writer and director, Jordan Peele, and the film’s star, Daniel Kaluuya, at the Hamptons International Film Festival. Daniel Kaluuya was recently selected as one of Variety’s 10 Actors to Watch. He is also known for his work in Sicario, and can be seen in the upcoming Black Panther and Widows. Peele and Kaluuya were joined by producer Jason Blum and actress Allison Williams at the HIFF for Anatomy of a Scene: Get Out, which explored the film’s themes.
Daveed Diggs is an American actor and musical performer. He originated the role of Marquis de Lafayette/Thomas Jefferson in the musical Hamilton, for which he won a Grammy and Tony Award. He was recently named one of Variety’s 10 Actors to Watch.  Diggs has had many recurring roles on television’s The Get Down, Black-ish and Unbreakable Kimmy Schmidt. He is also an executive producer, composer and actor for ABC’s The Mayor. You can look for him in the upcoming film Wonder with Julia Roberts.
On Monday, October 30th, the Port Jefferson Documentary Series will feature a special screening of the documentary Sidemen: Long Road to Glory at the Long Island Museum in Stony Brook. The movie shines a light on the under appreciated careers of Pinetop Perkins, Hubert Sumlin and Willie “Big Eyes” Smith. The film features appearances by Gregg Allman, Bonnie Raitt and Joe Perry. The screening will also feature a live performance by guitarist Scott Sharrard, as well as a Q and A with Scott Sharrard and Scott Rosenbaum conducted by radio host, Tom Needham. The event is co-sponsored by the Long Island Music Hall of Fame and the Long Island Blues Society.
About the Sounds of Film
The Sounds of Film is the nation’s longest-running film and music themed radio show. For the past 30 years, the program has delivered a popular mix of interviews and music to listeners all over Long Island, parts of Connecticut, and streaming live worldwide on the Internet. Previous guests include Alec Baldwin, Billy Joel, Laurie Anderson, Michael Moore, Wallace Shawn, Chuck D., Mayor Giuliani, Peter Yarrow and Hal Hartley.