More than 20 Long Islanders courageously volunteering to box in the Long Island Fight for Charity Main Event on November 25, 2013 learn their matches. 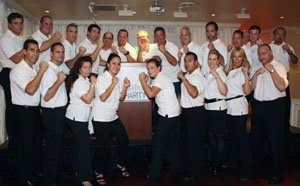 Melville, NY - October 18th, 2013 - Long Island Fight for Charity, one of Long Island’s largest and most anticipated charity networking events of the year, has announced its boxer matchups for the 10th Main Event on Monday, November 25, 2013 at the Hilton Long Island in Melville.  Boxing matches feature local business professionals going toe-to-toe on the canvas as the main attraction. This popular fundraising event includes food and beverages provided by local restaurants.

Proceeds from this unique LI Fight for Charity fundraiser will be donated to The Long Island Community Chest, The Genesis School and the National Foundation for Human Potential. Long Island Fight for Charity since 2003 has donated $700,000 to Long Island charities.  This event is expected to sell out and break previous records.

Tickets for the main event are available online.  Ringside V.I.P. seats are $195, premium seats are $125, and both include admission to a pre-event special networking and cocktail reception.  The V.I.P. reception starts at 5:30 p.m. The doors open at 6:00 p.m. and the boxing matches begin at 6:30 p.m. More than 20 local restaurants will provide food and beverages for the event.  For tickets and information, please visit www.lifightforcharity.org or call 877-240-7821. To see great photos, visit http://flic.kr/s/aHsjKqa8oK.