This event is a collaboration between the Great Neck Arts Center and the Town of North Hempstead. In the past, the GCIFF has welcomed stars such as Ed Burns, Bruce Dern, Brian Dennehy, Phil Donahue ... 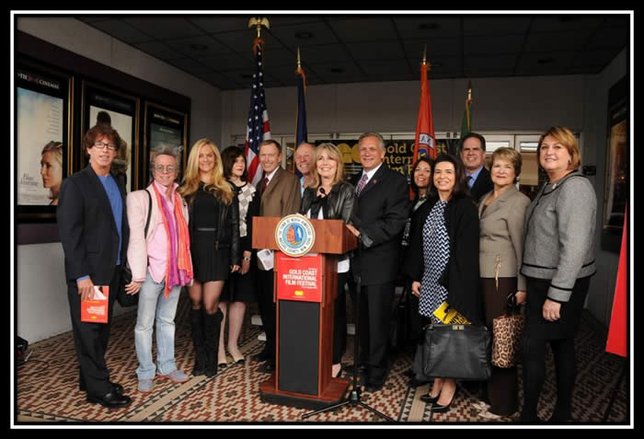 Great Neck, NY - October 11th, 2013 - Nassau County Executive Edward P. Mangano joined Gold Coast International Film Festival founder and Executive Director Regina Gil; Dance/Pop artist Consuelo Vanderbilt Costin, who is the seventh generation descendent of Cornelius Vanderbilt; and Selected Actors, Directors and Producers from the films including:Jeffrey Gurian, Fred Carpenter (Send No Flowers) and Jackie “The JokeMan” Martling to announce the films, events and activities for the 3rd Annual Gold Coast International Film Festival (GCIFF) that will take place October 21-27 at various venues across the North Shore. This event is a collaboration between the Great Neck Arts Center and the Town of North Hempstead. In the past, the GCIFF has welcomed stars such as Ed Burns, Bruce Dern, Brian Dennehy, Phil Donahue and Baz Luhrmann.

This year, the Festival will honor legendary actor, Paul Sorvino (GoodFellas, Bulworth,The Cooler) with a Lifetime Achievement Award on Wednesday, October 23 at the Annual Benefit Gala at the brand new venue: The Space in Westbury. The Gala will also honor Susie Essman, (co-star of HBO’s Curb Your Enthusiasm) with the Artist of Distinction Award for Comedy. From across the “pond” young British actress Bonnie Wright (of the Harry Potter film series), Melanie Lynsky(2 ½ Men, Ever After) and Emmy Nominated Actor, Jason Ritter (Parenthood)will keep the night lively. GCIFF will offer up a slate of fresh, exciting films that everyone will be talking about for the rest of the year.

Here’s a partial list of films at the Festival:

· The Face of Love- a romantic drama starring Annette Bening and Ed Harris, direct from the Toronto Film Festival.

· The Prime Ministers- based on the bestselling book by Ambassador Yehuda Avner, who will be in attendance for a Q&A and book signing onSunday, October 27th).

· Stand Clear of the Closing Doors- the story of an autistic boy from Far Rockaway who gets lost on the subway on the eve of Hurricane Sandy – some of the film was shot while Sandy hit.

· The Short Game-an award winning documentary about the best 7-year-old golfers from all parts of the globe competing to be the next world champion.

· In God We Trust-a brilliant new film about the Madoff scandal from the perspective of his personal secretary.

· The Kill Team- U.S. soldiers are put to the test in this Best Documentary Winner at Tribeca.

· Comedy Warriors-a documentary about wounded Iraq/Afghanistan vets who work with professional writers and A-List comedians like Zach Galifianakis, B.J Novak, Bob Saget and Lewis Black who help them tell their story with humor. There will be a Q & A with the director John Wager and Warrior Joe Kashnow (who will perform after the screening). Other Warriors may join on late notice.

Other highlights of the festival include, Bettie Page Reveals All (documentary),the New York Premiere of Blumenthal(comedy) and Send No Flowers(drama including Q & A with stars Sean Young, Tony Lo Bianco, Gianni Russoand Jackie Martling on Sunday, October 27th). The festival will also feature the directing and writing debut of Bonnie Wright(Ginny Weasley from the Harry Potter film series) screening her short film Separate We Come, Separate We Go.

The spotlight is shined on Israeli films with the screening of Big Bad Wolves(an action-drama) and Foreign Lettersa touching story for the family and teen market.

With a focus on “crowd pleaser” films, GCIFF offers up the Long Island Premiere of Aayna Ka Bayna(Delinquent Dancers) a kinetic, fun Bollywood meets hip-hop mash up, along with Dancing in Jaffa(Doc) about Israeli and Palestinian kids who cross cultural and political boundaries to learn ballroom dance together; Also on board is Commie Camp(Doc) telling the story about an established peace and justice summer camp for kids (with Q & A with director). This Ain’t No Mouse Music(Doc) tracks the creators of indigenous music, including Zydeco, Bluegrass, Cajun, wild Hillbilly country, Tex-Mex and New Orleans R&B with a soundtrack that bites, kicks and screams. Also on tap is Will You Still Love Me Tomorrow? A fresh and playful comedy about the odd realities of desire in traditional Taipei that will resonate with the LGBT community.

Jackie (The Joke Man) Martling will appear on October 19th at the Gold Coast Arts Center in a pre-festival kick-off event. Comedy Writer and Producer, Jeffrey Gurian will present his film The Business of Comedy and offer a Q & A with Richie Tienken, founder of The Comic Strip,followed by abook signing of his book "Make 'Em Laugh" which tells the 35 year history of the club.