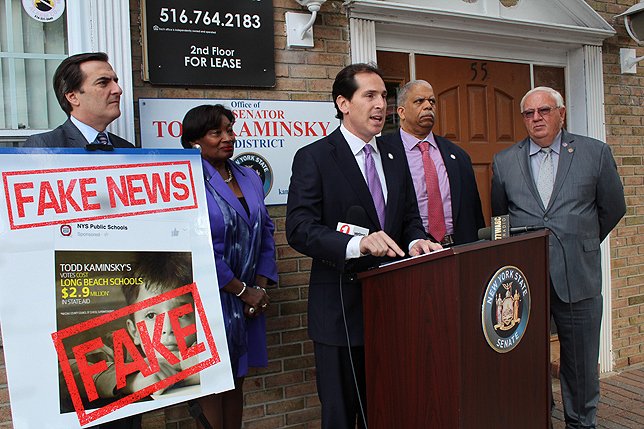 Rockville Centre, NY - October 3, 2017 - NYS Senator Todd Kaminsky was joined by Senate Majority Leader Andrea Stewart-Cousins, and Senators Michael Gianaris, John E. Brooks and Leroy Comrie today to announce legislation (S.6896) to prevent anonymous and false political attack ads on social media.
Senator Kaminsky also released a letter he sent a letter to Mark Zuckerberg, Chairman and CEO of ‎Facebook, explaining how the social media platform was used to deceive New York voters in his district, and warning him of future deceptive ads.
“False, misleading, and anonymous advertisements mislead voters and harm our democracy--and it must end immediately,” said Senator Todd Kaminsky. “Not another political ad should run on social media without voters knowing exactly who paid for it. It’s one thing to lie to a voter; it’s quite another to be able to do it anonymously, without any accountability. Political ads on television, in mail and new media platforms like Facebook should be transparent.”
Senator Kaminsky’s legislation would require that all political ads seen on social media clearly state who paid for them. Once enacted into law, campaigns and those trying to influence elections will no longer be able to avoid taking responsibility for the content of their political communications. Right now in New York, many forms of political advertisements carry no disclosure requirement. This law would greatly expand the definition of a political advertisement and require ads to disclose on their face who has paid for them. Importantly, this would cover digital and mail political advertisements, the vast majority of which are unregulated in New York State.
“Voter participation is at embarrassing lows because we make it too hard to participate in our democracy, and because dirty campaign tactics and fake news frustrate New Yorkers. Senator Todd Kaminsky’s legislation will help combat slanderous ads by making digital ads come under the same regulations as broadcast and print media. In this era of fake news and malicious campaign attacks, protecting the integrity of our campaign process really matters and I applaud Senator Kaminsky for his leadership on this issue,” said Senate Democratic Leader Andrea Stewart-Cousins.
“Updating state laws to address modern campaign tactics is a good way to combat nasty online attacks and lies that currently hide behind anonymity. I applaud Senator Kaminsky for stepping up and leading this fight,” said Senate Democratic Deputy Leader Mike Gianaris.
“Often legislation must catch up with technological advancements so the essence of a law’s intent doesn’t evaporate into the ether of outdated legal language. This bill addresses just such a situation. We can no longer allow hidden political groups to use the bullhorn of social media and other outlets to broadcast falsehoods whilst hiding behind a screen of anonymity or false identification. This bill will provide transparency in a political arena that sorely lacks it,” said Senator John E. Brooks.
“As Ranking Member of the Senate Elections Committee, I have two hallmark priorities: robustly empowering voters and ensuring the integrity of entire electoral process itself." said Senator Leroy Comrie "Senator Kaminsky’s important and timely legislation will wisely modernize our election laws to ensure that political communications made through digital means—such as Facebook—must clearly disclose the identities of those who orchestrate them.  I wholeheartedly support this rational proposal which represents a significant step that will empower and educate voters to resist and act against the agents of fake news and political subterfuge,” said Senator Leroy Comrie.
Last month, Facebook disclosed to federal investigators that it sold $100,000 worth of advertising to a buyer connected with the Russian government in an attempt to influence the 2016 presidential election. Here in New York, Facebook sponsored ads by fake groups such as “NYS Public Schools” or “Stop the Corruption in Albany Now” have targeted voters to mislead them with attack ad campaigns.
In response, Facebook recently committed to stricter review of political ads, requirements that the purchasers of ads be identified, and an effort to prevent “fake news”. But those are internal policies, not laws. The bill announced today would ensure that, at the very least, New York political ads are published transparently online by holding the author accountable.