South Farmingdale Water District and U.S. Senator Charles Schumer call on the U.S. Navy and Department of Justice to immediately follow through on the Navy's reimbursement obligation. 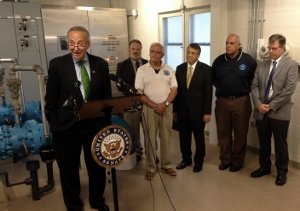 South Farmingdale, NY -September 3rd, 2014 - U.S. Senator Charles E. Schumer and the South Farmingdale Water District (SFWD) recently called on the United States Navy and Department of Justice (D.O.J.) to prevent significant water bill increases for Farmingdale’s thousands of residents and immediately follow through on the Navy’s years-old obligation to reimburse the SFWD for the capital costs, operating and maintenance of the water treatment facility, which was constructed at Plant No. 3 4090 Hicksville Road, Seaford, NY.

SFWD has borrowed almost $5 million from the Town of Oyster Bay to construct the water treatment facility to filter and purify the ground water impacted by the Bethpage plume.  Repaying the bond will cost consumers $1.5 million each year over the course of the loan, and Schumer says consumers should not be on the hook for something they didn’t create. Each month that passes will increase the unfair burden on SFWD and its thousands of customers, and Schumer will say that the federal government must step up quickly in order to prevent these costs from being passed on to ratepayers, as is expected to occur in the near future.

“South Farmingdale Water District consumers didn’t cause this mess and they shouldn’t have to pay to clean it up,” said Schumer. “The Navy and Department of Justice should stop stringing the Water District along and provide the resources needed to pay down the bonds and prevent water rates from sky-rocketing.  It is bad enough that consumers have to deal with the Grumman plume – they shouldn’t have to pay extra to do so.”

Schumer stood at SFWD Plant No. 3 alongside SFWD Commissioners Ralph Atoria and John Hirt, along with James Rigano, legal counsel to SFWD and Gary Loesch, SFWD’s lead engineer from H2M.

The U.S. Navy operated the Naval Weapons Industrial Reserve Plant in Bethpage, New York for several decades, which resulted in soil and significant groundwater contamination containing volatile organic compounds (VOCs).  The SFWD, as well as other neighboring Water Districts, were approached in November 2000 by the U.S. Navy relative to a widespread groundwater contamination plume* flowing in a southerly direction toward 20 or more public drinking wells that serve over 250,000 Nassau County residents across South Farmingdale, Bethpage, Massapequa and Wantagh Water Districts.

The Navy developed a water contingency plan in connection with N.Y.S. Department of Environmental Conservation (DEC) that resulted in the Navy constructing outpost monitoring wells upgradient of Plant No. 1 and Plant No. 3 in SFWD.

The Navy agreed that if contamination from their site was identified in the outpost monitoring wells, they would pay for all future costs that the water suppliers would incur for the required treatment facilities or abandonment and replacement of the respective wells. In 2004, the outpost monitoring wells upgradient of Plant No. 1 and Plant No. 3 indicated that they were impacted by contamination from the naval plant site at levels above the trigger values agreed to by the Navy, DEC and SFWD.

The SFWD pursued a reimbursement settlement with the Navy for Plant No. 1, and in 2010 with the assistance of Senator Schumer received $14.5 million to cover all construction, maintenance and operation costs.  Now, Schumer is demanding that a settlement be reached with the U.S. Navy and the D.O.J. on Plant No. 3. To date, SFWD has not received any reimbursement payments and the delay has caused SFWD to make its final payment for construction.  If reimbursement is not made immediately, water rates for all consumers will go up.

"We are here to protect the taxpayer. It’s that simple. They shouldn’t have to pay for these treatment plants,” Schumer continued. “The Navy knows they need to pay, and they’ve said so.  Now they need to stop dragging their feet and pay up.”

The SFWD Board of Commissioners have continually expressed that all water pumped from all wells meet or exceed all local, state and federal standards. The Commissioners had no choice but to design, construct and build both treatment facilities in order to ensure that the water delivered within the District is safe to drink.

If the treatment facilities were not constructed in time, there was the potential that the District would have had to close down or restrict wells at both Plants No. 1 and 3.  The four wells at these two sites provide nearly 40% of the District’s well capacity, which are needed to meet existing water supply and fire flow demands.  The loss of any of these wells could adversely impact SFWD’s ability to meet peak and emergency pumping requirements, thereby impacting the ability to deliver an adequate water supply to its 45,000 consumers.

While the District would have preferred to have the money in hand from the Navy prior to building the treatment facilities, it could no longer tolerate any further delays and had to proceed with both treatment projects.

Senator Schumer said his office has been sending letters and speaking with the Navy by phone asking them to commit to a timetable for reaching a final agreement on payment.  Since these communications, the Navy has not complied. Schumer added, “I will do what's necessary to get the Navy to attend to this immediately. Our consumers should not be burdened with these additional costs, and the District should not have to be put in this situation.”