Schumer Has Pressed the VA to Reverse Course, or At Least Expedite Study –Schumer Asks Today for Update & Timeline For Study’s Completion. 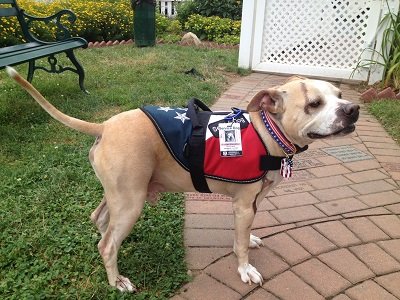 Washington, DC - September 24, 2013 - U.S. Senator Charles E. Schumer today requested an immediate status update of the study currently being conducted by the Department of Veterans Affairs (VA) on the policy to reimburse the cost of service dogs to veterans who have Post-Traumatic Stress Disorder (PTSD).  Service dogs are often recommended by doctors to veterans with PTSD because they have been shown to have a positive psychological impact on recovery.  Last year, the VA ended its policy of reimbursement to veterans with strictly psychological disabilities until they could complete their own study on the merits of using service dogs to help treat PTSD patients.  Schumer strongly supports the reimbursement of the service dogs, and has urged the VA to reverse course and continue reimbursement. Schumer said today, at the very least, the VA must expedite this study, and provide updates related to hold-ups in the study, including finding a new dog vendor and an updated timeline for the study’s completion. Schumer stated that if the VA does not release more information on the status of their new policy directive, or if the study is completed and it’s determined that vets won’t get financial assistance for these service dogs, he would be open to pursuing legislation requiring this reimbursement.

“Our veterans fought bravely on the field of battle, but unfortunately, for some veterans, the battle does not end once they return home,” said Schumer. “Sadly, the horrors of war mean that many veterans come home with PTSD and other mental an emotional ailments. That’s why we owe it to these vets to provide them with every recovery option possible, including service dogs prescribed by a doctor, to help them cope with the trauma and speed recovery. The VA should not deny benefits to veterans that will help them to access service dogs, and I’ve urged them to reverse course on this policy change.  If they do not release more information on the status of the study and demonstrate real progress, I will consider pursuing a legislative requirement that would compel the VA to help our veterans with the cost of these service dogs.”

According to federal law, the VA can reimburse veterans with both physical and mental disabilities for the costs of owning a service dog, if a medical professional deems such a dog to be beneficial.  Service dogs are trained dogs that offer assistance to people with disabilities. These dogs can be used to help people with visual, hearing or other physical ailments, as well as helping people with mental illnesses and emotional trauma. Mental health service dogs may help treat people with PTSD because they help them to cope with the everyday challenges including anxiety attacks, migraines and nightmares. There has been evidence to suggest that mental health service dogs can be trained to help avert panic attacks and remind veterans to take medication.

However, according to a VA directive that went into effect on October 5th, 2012, only veterans with physical disabilities will have this option, until a VA study on the matter is completed.  The VA’s current directive eliminates service dogs as an option to treat mental ailments until an internal study is completed in 2014.  This is despite evidence that service dogs have the capability to assist those with mental disabilities. In the New York metro area, there are approximately 6,614 veterans who suffer from PTSD and are being treated at VA medical facilities or Readjustment Counseling Centers and 182,147 around the country.

Schumer wrote to the VA to request an update on all aspects of the study, particularly if the VA has found a new vendor to increase the number of pairs of Veterans and service dogs in the study. He said that the VA’s doctors and mental health professionals should be the ones that determine the best treatment for those with mental disabilities so that veterans with invisible wounds returning home get the assistance that they need. The VA’s rule specifically eliminates mental health issues as a qualification for obtaining benefits for a service animal. Schumer noted that clinical evidence may take time to complete, and veterans who may benefit from mental health service dogs may suffer in the mean time before the science catches up to what is already known. Schumer also made the case that it is extremely difficult for veterans with PTSD and TBI to be able to cover the full cost of a service dog, which could cost tens of thousands of dollars. Schumer explained that it is a disservice to these veterans, who have fought for our country, to be denied the treatment they need. Even though VA only covers a portion of the expenses, it is a start that the VA should build upon.

Prior to the change in VA policy, Congress pushed for the VA to begin researching the ways in which service dogs might be able to help veterans who suffer from the two most common mental disabilities from combat in Iraq and Afghanistan, PTSD and TBI and provide clinical evidence to suggest the effectiveness. The study is being conducted at the James A. Haley Veterans Hospital in Tampa, Florida and is supposed to take three years to be completed in 2014.  In Schumer’s letter to Secretary Shinseki, he requested an updated timeline for the completion of the study.  Schumer also said that while this study is underway, and especially if there are any delays, doctors and mental health professionals should still be allowed to recommend dogs for those with mental disabilities if they feel it will be beneficial.

A copy of Senator Schumer’s letter to VA Secretary Shinseki appears below:

I am writing to follow up with you to improve VA policy so that Veterans with Post-Traumatic Stress Disorder (PTSD) are provided service dogs.  In your December 2012 response to me, you stated that the VA was conducting a research study titled “Service Dogs for Veterans with PTSD,” and that the VA was searching for a new service dog vendor to increase the number of pairs of Veterans and service dogs in the study.  I request an update on all aspects of this study, in particular, whether the VA found a new vendor and an updated timeline for the study’s findings.

For Veterans who suffer from PTSD, we owe them every possible recovery option, including service dogs prescribed by a doctor.  I urge you to make service dogs available to those Veterans who could benefit from them.  I hope you will agree that the on-going study should not interfere with Veterans receiving the care they need.  I feel strongly that the VA should provide service dogs to eligible Veterans with PTSD. Many of my constituents are expressing concern about the VA’s current approach and I hope that we can work together to ensure that our Veterans are provided for.

Please contact me or my staff if you have any questions or concerns.