Car enthusiasts from across the Tri-State showed up by the hundreds to view a broad selection of classics, customs, hot rods, muscle cars, resto-mods and foreign cars. 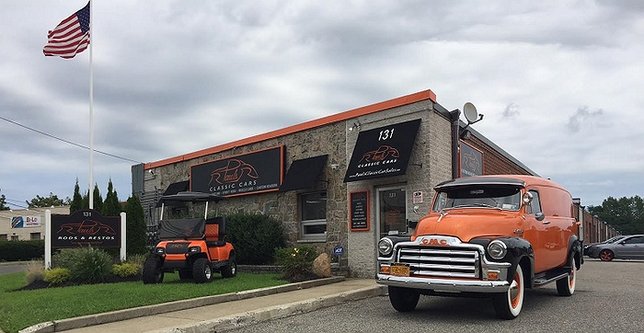 Paul’s Rods & Restos is one of the region’s leading auto restoration facilities occupying over 26,000 square feet in Deer Park, NY. In addition to having the opportunity to tour Paul’s facilities and talk with some of the area’s top auto technicians about their restoration jobs in progress, attendees had the opportunity to get a close-up view on some extraordinary cars. Among them were a ’66 Resto-Mod Vette,’54 GMC Panel Truck, and a ’69 Custom Camaro Convertible.

Perhaps most noteworthy among the cars was a 1970 Pontiac GTO Convertible Custom that Paul’s Rods & Restos had previously restored. The car belonged to the late Major Jeffrey Calero, a member of the 1 st Battalion 20 th Special Forces Group of the National Guard, who died in Afghanistan in 2007 while on patrol. Major Calero had started restoring his dream car and when he died, Paul DiMauro, founder and owner of Paul’s Rods & Restos, decided to complete the extensive job at no cost to the family with contributions from 37 different companies and organizations, as well as many of Paul’s loyal customers.

According to DiMauro, “I believe our veterans deserve all the support we can give them and restoring Major Calero’s car was one way we were able to honor this veteran and express our appreciation to his family for the ultimate sacrifice he made serving our country.”

At this year’s car show and open house, DiMauro announced another give-back he is planning on behalf of our nation’s veterans. Specifically, Paul’s Rods &amp; Restos team will be restoring a 1966 Mustang Convertible Resto-Mod which will then be auctioned off with the proceeds from the car’s sale going to Homes for Our Troops ). Homes for Our Troops is a privately-funded 501(c) (3) nonprofit organization that builds mortgage-free, specially-adapted homes nationwide for severely injured veterans post–9/11, to enable them to rebuild their lives. The majority of these veterans have sustained severe injuries such as multiple limb amputations, partial or full paralysis, and/or severe traumatic brain injury (TBI). The goal is to help restore some of the freedom and independence that our veterans sacrificed while defending our country, and giving them an opportunity to focus on their recovery, family and rebuilding of their lives.

To mark the somber 15 th anniversary of 9/11, activity at the car show and open house paused for the playing of the national anthem. This was followed by live music performed by local band.