The storm was upgraded to a tropical storm as it approached Florida's Golf Coast. 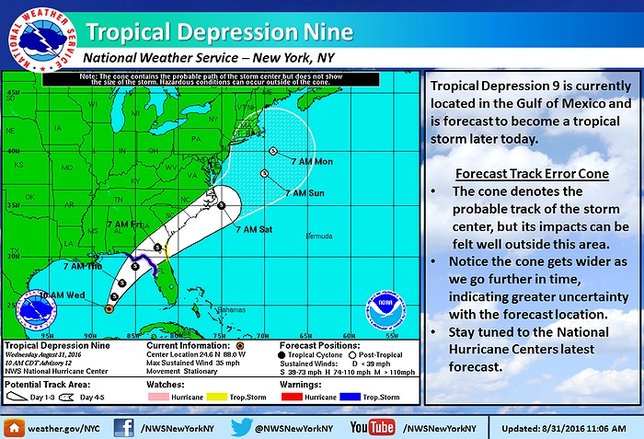 The predicted path of TD9 as of the morning of Wednesday, August 31st.

Update - August 31, 4:00 PM - Tropical Depression 9 has intensified to a tropical storm, and is now named Hermine.
A tropical depression currently being referred to simply as TD9 is on its way to Florida right now. The storm is expected to strengthen as it progresses toward the southern state's Gulf Coast, where it will likely make landfall sometime Thursday afternoon, and is forecast to become a tropical storm today.
Preparations for the storm have already begun as Florida braces for impact and experts watch to see whether it intensifies to the point of becoming a full-fledged hurricane. Hurricane watches and warnings have already been issued for parts of the state.
Of course, Florida is not the only state at risk from TD9. Georgia, South Carolina, and North Carolina are all well within TD9's current projected path, and there is even an outside chance that the storm could curve back towards Long Island as it progresses northward.
It is still much too early to predict whether TD9 is likely to make landfall again near New York, or what the strength of the storm will be when it comes as far north as the Island, but if it continues along its predicted trajectory at its expected pace it will likely reach LI's latitude around Monday morning.
Even if TD9 does not hit Long Island directly, the effects of the storm could still impact the regions with intense winds, heavy rain, and strong currents.
For the most up to date weather information, head over to the LongIsland.com Weather Center, where you can find the latest weather forecasts, advisories and more.
To get the latest traffic & road conditions before traveling, visit the LongIsland.com Traffic Center, and be sure to check out the live traffic feeds on our Traffic Cam Page.