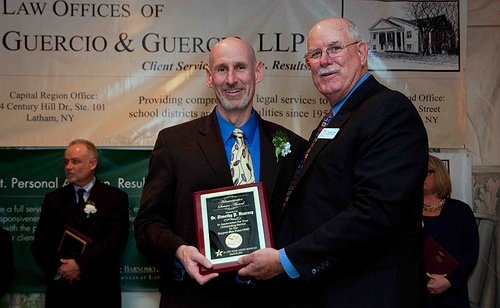 Holbrook, NY - March 31, 2015 - Leading Long Island’s public schools to greatness – that was the theme of SCOPE’s 14th annual School District Awards Dinner, held at Villa Lombardi’s in Holbrook on March 23, 2015. The annual event was part of SCOPE’s celebration of 50 years serving children and their families. More than 140 employees from dozens of school districts across Long Island were honored for their extraordinary contributions and dedication during the 2014-15 school year.
Awards were presented in five categories: School Board Service, Community Service, Teacher Service, Support Staff Service and Administrator Service. Honorees in these five categories received a personalized plaque in recognition of their outstanding achievements.
In his welcoming remarks, SCOPE Executive Director George Duffy thanked those in attendance for serving their communities with such dignity and dedication. He also thanked them for addressing the challenges that thousands of students face on a daily basis. Susan Schnebel, president of SCOPE’s Board of Directors and superintendent of the Islip School District, addressed the honorees by telling those assembled: “Those being honored this evening are the cornerstones of our community. They are extremely passionate and proud.”
Mr. Duffy individually acknowledged the honorees in each of the five categories as they were called on stage to receive their plaques. Afterward, many honorees commented on how grateful they were to be recognized, as well as how much the recognition had inspired them to continue to strive for excellence each day in their communities.