Tour promotes beverage industry and tourism in New York with a first-hand look at how New York beers, spirits and wines are produced. 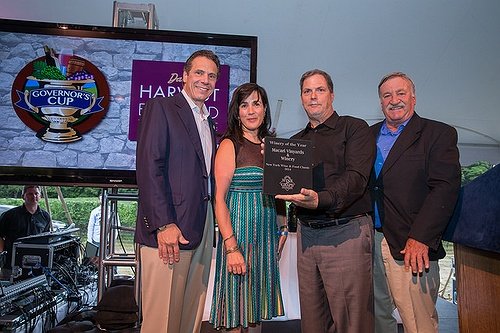 To further highlight Long Island’s agriculture and tourism industries, the Governor also announced that the State will allocate $300,000 to launch a new promotional effort to include a targeted advertising campaign and events designed to leverage international travelers and media attention. This effort, initiating in 2015, will also include expanded partnerships with a variety of transportation companies to increase air, car, rail and bus travel options from New York City and beyond. This multi-faceted approach is intended to attract thousands of visitors from across the nation and around the globe to experience the best of Long Island’s craft beverage producers.

“New York’s agricultural industry produces some of the best craft beverages in the world, and its small businesses support jobs and tourism revenue in communities across the state,” Governor Cuomo said. “Today, we’re taking another step to raise the profile of these local vendors by highlighting some of Long Island’s best venues. I am proud to congratulate the winners of the Governor’s Cup, as well as the many other awardees and businesses for their participation in this year’s competition.”

The promotional initiative announced today will build on the I Love NY campaign’s existing partnerships with the MTA and Port Authority, focusing on JFK and LaGuardia airports, the Airtrain and platform advertising on sections of the Long Island Railroad, in order to reach potential visitors already traveling to or through New York City. In addition to the substantial tourist market linked to New York City, online and print advertisements will also target key international travel markets in Canada, Europe and Asia that have been shown to be dependable export hubs for craft beverage products from New York and the U.S. Based on a correlation between high rankings for annual tourist visits to the New York City area and per capita wine consumption and wine imports, the countries with identified potential are Canada, the U.K., France, Germany, China, Japan and Sweden.

This new promotional initiative will also expand on existing relationships with Delta and Avis-Budget so that boarding passes and car rental/bus vouchers may be used for offers at wineries, hotel accommodations, restaurants, and other businesses on Long Island. These offers will be available over targeted weekends in 2015.

Since taking office, Governor Cuomo has worked to further develop the beverage industry, which is a major driver of job creation and economic development in communities across the State. As a result of two successful Wine, Beer, Spirits & Cider Summits hosted by the Governor, New York State has implemented groundbreaking initiatives and enacted legislation to support and grow the beverage and agriculture industry, including a new marketing campaign to promote the industry and regional tourism, and a series of regulatory reforms that significantly reduce business costs for beverage producers.

As a result of a new law signed by the Governor in 2012, farm breweries have also seen significant growth in recent months – with 57 new farm breweries opening as a result of this law having taken effect in January 2013. Like Farm Wineries, Farm Breweries must use specific levels of locally grown ingredients. Farm Breweries enjoy similar privileges to Farm Wineries, including the ability to open up to five offsite retail outlets, open restaurants, conduct tastings and sell related products, including souvenirs, food to complement beer tastings, and equipment and supplies. As Farm Breweries continue to open across the state, the demand for locally ingredients has likewise grown.

New York’s beer, wine, spirits and cider industry continues to have a tremendous impact on the State’s economy. Between manufacturing, agriculture, distribution and retail, in 2012 the industry had a combined economic impact of more than $27 billion and employs more than 85,000 people. According to a recent study commissioned by the New York Wine and Grape Foundation, the full economic impact of New York grapes, grape juice and wine in 2012 was $4.8 billion for New York State.

This year's competition included 835 wines, 20 hard ciders and eight spirits from across the state. The awards were based on blind tastings by 22 expert judges—four from California, ten from New York, seven from other states and one from France. Judges included prominent wine writers, restaurateurs, retailers and wine educators. Judging panels determined the initial awards, with top-scoring wines evaluated by all 22 judges for the Best of Category and Governor's Cup awards.

The Governor also announced the following winners from the 2014 New York Wine & Food Classic competition for the “Best Long Island” wines in several categories, as follows:

Jim Trezise, President of the New York Wine & Grape Foundation, said, “Today was really an opportunity to showcase the drivers behind the wine industry’s growth in New York, which has received unparalleled support from Albany by way of open ears and real regulatory reform. But what makes New York excel in this arena is the care and talent of vineyards who bottle the best wines in the world season after season. The fact is, there is simply nothing in the world like a New York wine.”

Sal Diliberto, President of the Long Island Wine Council, said, “Where we are with wine production in New York was literally a dream just a few years ago. All hands are on deck to move the industry forward in this state, and the results are real; more wine is being bought, boosting tourism and ultimately creating more jobs throughout our communities across New York.”

Ron Goerler, Chair of Harvest Fest and owner of Jamesport Vineyards, said, “These wines, hand in hand with the absolute beauty of Long Island, present newcomers and fans with a perfect platform for what makes New York wine so unique. Jamesport Vineyards is proud to be part what vineyards across New York provide – a distinct talent to create and share with the entire world some of the most amazing wines.”

Harvest Fest also included additional awards presented to those who have made significant contributions to the Long Island farming and winery industries, including Florence Fabricant, a New York Times wine and food writer and author, and Tom Schaudel, a master chef with several restaurants on Long Island who is also a popular radio show host and local personality.