Construction moves ahead on MSG Sphere entertainment venue in Vegas. 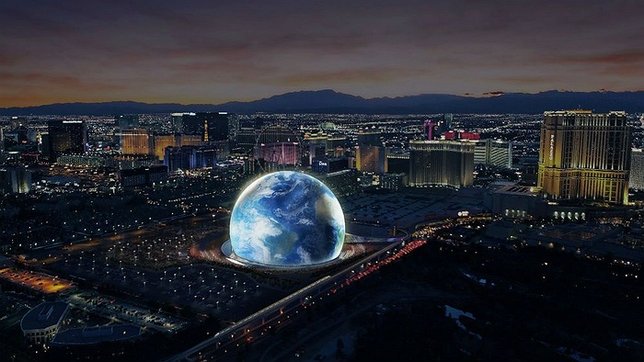 James Dolan and MSG see the MSG Sphere as a futuristic entertainment venue.

The Madison Square Garden Co., led by CEO James Dolan, is moving ahead with construction of a venue in Vegas expected to cost well north of $1 billion.

MSG in a statement on Tuesday said it has “made significant progress on MSG Sphere,” which it described as “its state-of-the-art entertainment venue currently under construction in Las Vegas” at the Venetian.

The company hopes to open MSG Sphere, which would seat roughly 17,500 and a mix of 20,000 seated and standing, in Las Vegas in 2021 as Dolan says the company begins its “next chapter, with MSG Sphere in Las Vegas starting to take shape.”

To put the venue's size in perspective, it's large for a concert venue, although small compared to a stadium.

The new concert venue in Las Vegas is slated to be 366-feet tall and 516-feet wide with about 875,000 square feet of interior space.

"Guests will be surrounded by the largest and highest resolution LED screen on earth," according to the company.

There will be more than 160,000 square feet or about 3.8 acres of display space that wrap around the interior of the venue, producing what MSG calls "a totally immersive visual environment" with a resolution about 100 times that of HD television sets.

A fully programmable LED exterior will create a "digital showcase for artists, brands and performers," according to the company.

"We plan to take a page out of our Christmas Spectacular playbook, with the goal of creating original attractions that showcase the venue's state-of-the-art technology and run multiple times a day, year around," MSG President Andrew Lustgarten said in a conference call for analysts.

He said he believes that "these attractions will result in MSG Sphere being the most highly utilized venue in our portfolio, and also serve as content that we can leverage across future MSG Spheres."

MSG said it’s difficult to estimate costs for big construction projects, but that it “is particularly challenging for one as unique as MSG Sphere.”

MSG’s Board of Directors in May approved a $1.2 billion preliminary cost estimate based on designs to develop a budget and financial projections for the project that broke ground in 2018.

“MSG expects the estimation process for MSG Sphere construction costs will be dynamic as the project moves forward,” the company added.

Construction costs through June 30, 2019 were approximately $109 million on the project being built by AECOM as general contractor.

AECOM is working on a “cost plus” construction contract resulting in lower fees if “hard” construction costs come in greater than an “incentive benchmark” agreed upon by MSG and AECOM.

AECOM’s initial proposal resulted in project cost estimates of about $1.7 billion, although MSG said it believes “this cost estimate is too high and is now in the contractual process of reviewing, testing and challenging the elements of AECOM’s estimates and assumptions.”

MSG is also “value engineering aspects of the project” to reduce costs and “believes it will be successful in achieving significant cost reductions through this process.”

The Las Vegas Sands Corp. has agreed to pay MSG $75 million to defray the construction costs of a pedestrian bridge that will link the venue to the Sands Expo Convention Center.

MSG expects the venue to attract a wide range of performers ranging from concerts to corporate events, awards shows to product launches, attractons and family shows as well as sporting events.