Paris Yates sings the national anthem at the August 11 Friends of the Smithtown Library Concert. 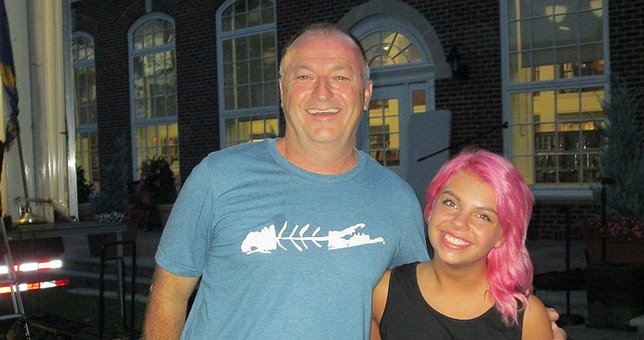 Smithtown, NY - August 15, 2016 - Paris Yates, a 2013 graduate of Smithtown High School East, is studying song writing and studio composition at SUNY Purchase. She has appeared in commercials and on Disney Channel’s “iCarly” and in “Conan” on TBS. In 2015, she released her first an album, titled “Open Book.” Ms. Yates has also sung at Citi Field for the New York Mets and most recently sang “God Bless America” at their game on August 14.

After reading about her in The Smithtown News, Legislator Trotta contacted her mother to see if Paris would like to sing the national anthem at one of the Friends of the Smithtown Library Summer Concerts.

“Although it started to rain, it didn’t stop Paris from singing a beautiful rendition of the national anthem. The crowd gave her a tremendous ovation,” said Suffolk County Legislator Rob Trotta.