Roselle Cacio is a Long Island high-schooler of Glen Cove. This summer she took advantage of a trip to visit relatives in Italy to follow her aspiration to be a social worker, by visiting the ... 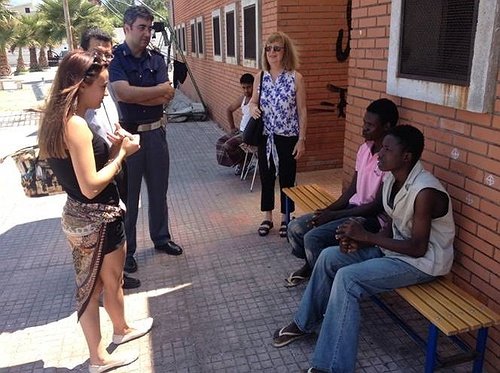 The Police supervises all exchanges.

Glen Cove, NY - August 10, 2015 - Roselle Cacio is a Long Island high-schooler of Glen Cove. This summer she took advantage of a trip to visit relatives in Italy to follow her aspiration to be a social worker, by visiting the African boat refugees’ first response center of Reggio Calabria, Italy. Roselle wanted to volunteer as a translator. Once there, she listened to the stories of the refugees.

The center is located in the gymnasium building of the Santa Maria del Lume church parish, where some of the refugees are hosted. Most are just waiting for the chance to move on to other locations in Europe, to join friends and relatives. Work opportunities are scarce even for the locals in Southern Italy.

Among the boat refugees that have been rescued by the Italian Coast Guard, the port of Reggio Calabria has received thousands of Africans during the last months. Access to the refugees is restricted, by the Carabinieri (military police) and the Guardia di Finanza (finance police) stationed at the center.

Although initial inquiries made to Caritas, the religious organization in charge of the hospitality, went unanswered, Roselle had acquired permission through the Parish reverend, Antonino Sgro, through one of her cousins, so she was initially able to visit the inside of the center. Subsequently she was limited to visit only from the outside, under the supervision of the police.

Particularly sad was the story of a girl from Badagry, Nigeria, about Roselle’s age, escaped, leaving all the rest of her family behind, after her brother was killed in a church bombing on Christmas Eve. The followers of Islamic terrorist group Boko Haram have been targeting Christians in Nigeria for months. The girl, who remains unnamed, fled to bordering Libya only to found more chaos and lawlessness, a situation that leaves Nigerians particularly unwanted and target of crimes. After having been raped and beat up badly by the brother of a woman who took her in her house, the girl saw no other way to safety than embarking for the perilous voyage across the Mediterranean Sea on a boat overflowing with Sub Saharan people escaping similar situations.

In spite, or right because of the fact that those people were survivors, Roselle found hope and optimism in the center. The refugees speak no Italian, but most took some English in school. For them it was a welcomed moment when they could have their feelings heard by the people who help them. Reverend Sgro was also pleasantly surprised at the visit, as the locals shun the center because they are wary of the surge of newcomers. The boat refugees rescue by the Italians is very controversial in the rest of Europe because, once in Italy, there are no borders to the rest of Europe. To counteract this, Europe is giving Italy funds to help with the expense of hospitality and keep the immigrants in Italy.