Broderick named by the Nassau Division of the National Association of Social Workers. 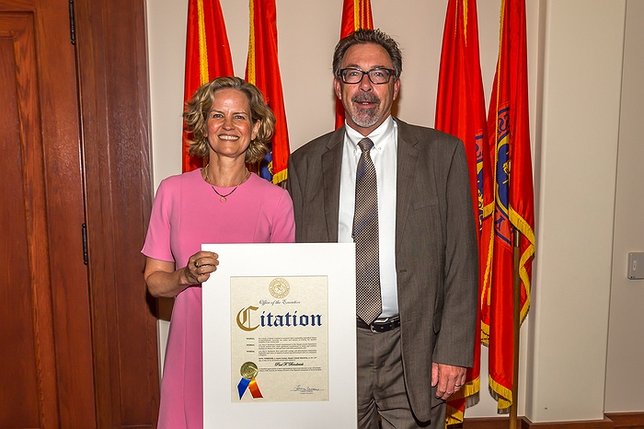 Mineola, NY - August 1, 2018 - Nassau County Executive Laura Curran recently congratulated DSS Deputy Commissioner Paul F. Broderick upon his being selected Public Citizen of the Year by the Nassau Division of the National Association of Social Workers (NASW). The award was presented at the annual NASW dinner at the Union Marriott Hotel on June 13, 2018.
“In his eight years as DSS Deputy Commissioner, Paul Broderick has made significant and meaningful contributions to the residents of our county,” said County Executive Curran. “Coupling his financial acumen with his commitment to serving all of Nassau’s neediest residents, Paul has worked diligently to ensure continued funding for many of DSS’ community partners, including Island Harvest, Long Island Cares, the Long Island Council of Churches and The SafeCenterLI.”
Broderick, a long-time resident of Massapequa Park, was also recently appointed as a Board Member of the Long Island Coalition for the Homeless (LICOH), where he has lobbied passionately to expand efforts for the rapid re-housing of Nassau County’s homeless families. In recognition of his advocacy, Broderick was awarded the 2017 Key of Excellence Award from LICOH.
“Paul Broderick exemplifies the dedication of Nassau’s financial executives ensuring that our neediest residents are provided with the essential services they need for the health and well-being of themselves and their families,” said DCSS Commissioner Dr. John Imhof. “In his efforts to secure permanent housing opportunities, Paul has championed the cause of the chronically homeless and has been duly recognized by his peers for his efforts.”
To read more about the Department of Social Services, go to NassauCountyny.gov, click on Departments and then select Social Services.