The Earth will be passing through the Perseid meteor shower in the second week of August, so prepare yourself to spot some of the brightest meteors across the night sky! 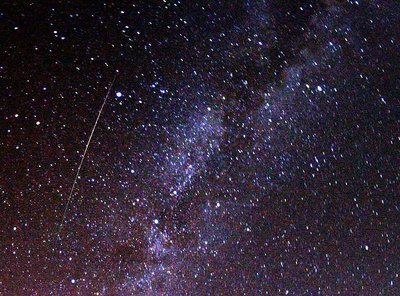 In the second week of August, stargazers will be coming out in droves at night to open areas where they can see the night sky and observe the Perseid meteor shower. Each year, Earth passes through the orbital path of Comet Swift-Tuttle, which leaves behind debris and comet dust, including the meteors that we call the Perseids.  The bright, quick-moving meteors leave behind bright streaks in the sky that last for a few moments after the meteor is gone. This year, the best viewing period for the Perseids is expected to be in the predawn hours of August 11, 12, 13, and 14, so unless you are a night owl, it may be best to set an alarm on those days to wake up after midnight and check the sky.

Witnessing the Perseids is free and easy for anyone to do. The Perseids are so bright that stargazers won’t need any equipment to see the meteors in all their glory. What it does require is patience, especially if you don’t see anything at first, or if there are clouds passing through, so be sure to check the weather before you try to see anything in the sky.  Astronomers recommend spending at least an hour looking at the sky to really observe the Perseids because the meteors come in spurts of dozens of meteors interspersed with lulls of no meteors at all.

Here are some more tips to stargazing, especially for the upcoming Perseid shower:

Find a Dark Place
When watching the night sky, it is imperative that you do so in a dark place with all of the lights out, preferably away from stores or other shopping areas that may produce light pollution and obscure stars and meteors.  Beaches, state parks, and national parks are often good dark locations for stargazing, and often open for later hours during meteor showers or other astronomical events.

Use Apps as Your Map of the Sky
If you have an android phone or tablet, download the free Google Sky Map app and point your phone’s camera at the sky to identify each of the stars and planets that you are facing.  Star Tracker Lite is a similar app that is available for free on the iPhone.

Check Out LI’s Observatory
Custer Institute and Observatory in Southold is a great resource for budding stargazers who want to learn more about the night sky and check out some of the high-power tools of the trade. Saturday night viewings are open to the public from sundown to midnight, weather permitting.  The observatory recommends not going out on full moon nights, as the less moon in the sky, the easier it is to observe the stars and constellations.

Find an Astronomy Club in Your Area
You don’t need to spend tons of money on telescopes and other astronomy equipment when you have astronomy clubs and other friendly neighborhood stargazers who will let you use their materials.  The Astronomical Society of Long Island (ASLI) meets twice a month, and has a mailing list with observation information. There is also a stargazer in Huntington Village who hosts viewing events through a powerful telescope, and will guide you towards viewing the Moon, Saturn, Venus, Jupiter, and even the International Space Station.