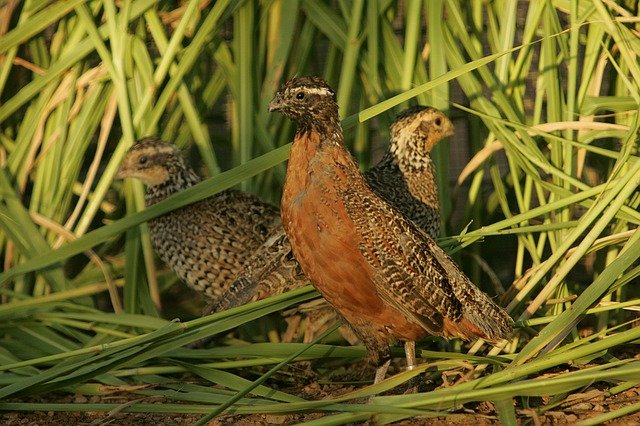 Suffolk County, NY - July 25, 2018 - County Executive Steve Bellone today announced a partnership with Third House Nature Center (THNC) to reintroduce the native Bobwhite quail population at Montauk County Park. Once a common sight in Montauk, the Bobwhite quail are now near extinction in the area with very few sightings reported in Suffolk County each year.
The five-year plan began earlier this year with the purchase of an incubator and 180 eggs from two regional breeders. In order for natural breeding groups to be established, officials will release tagged quail at four locations throughout the park each year for the next five years.
“Suffolk County Parks are rich with cultural history and vast natural beauty and a major part of preserving what makes our parks such a special place to visit is the diverse native species that inhabit these areas,” said Suffolk County Executive Steve Bellone. “I applaud Third House Nature Conservancy for their commitment to reinvigorating our native quail population and I look forward to seeing the fruits of this exciting partnership."
Four months after the initial batch of eggs went into the incubator, the first two dozen juvenile quail, all sporting personalized leg bands, will be released at Third House on Saturday, August 11 at 11 a.m. The public is invited to attend. Further groups of banded birds will be released throughout the summer at various locations throughout Montauk County Park.
Ed Johann, President of the Third House Nature Center said: "This is year one of a five-year commitment that we have made to the county to raise and release birds in Montauk County Park. Survival rate for the quail is anticipated to be low, and so we will continue to release birds until we can establish viable breeding colonies.”
Phil Berdolt, Commissioner of the Suffolk County Parks Department said: “Suffolk County Parks is pleased to be partnering with the THNC on the Montauk Quail Restoration Project. Bringing THNC back in to the Third House as our Resident Naturalists was the right decision that has obviously paid off. The Bobwhite Quail population has significantly declined over the past few decades and to re-release them in to our park is absolutely fantastic. I would like to thank Ed Johann and Jessica James for all their hard work to help reintroduce the Bobwhite Quail back to the East End.”
Jessica James, Manager of the Montauk Quail Restoration Project said: "Quail are omnivorous. Besides eating greens and seeds, they are stealthy and effective hunters, scouring the grasslands and thickets for bugs. Could there be a correlation between the frightening rise in the local tick population and the demise of the Bobwhite?”
Theories vary as to what caused the precipitous decline in Bobwhite populations over the last 20 - 30 years. One thing is for sure: the fact that these charming, stout little birds are ground nesters makes them and their young easy prey for predators, especially feral — and even outdoor pet — cats.
THNC, a 501c3 environmental education organization, is located in the historic Montauk Third House, built in 1806. It sits on a hillside overlooking the rolling fields of Montauk County Park and once housed the cattleman that tended to the livestock at Deep Hollow Ranch, which is still in operation today. It is the 2nd oldest surviving structure in Montauk. For more information about them and their programs, visit www.thirdhousenaturecenter.org.