Where Angels Play and The11518 to Help Construct Community Playground

A special fundraiser will be held on Saturday, July 26. 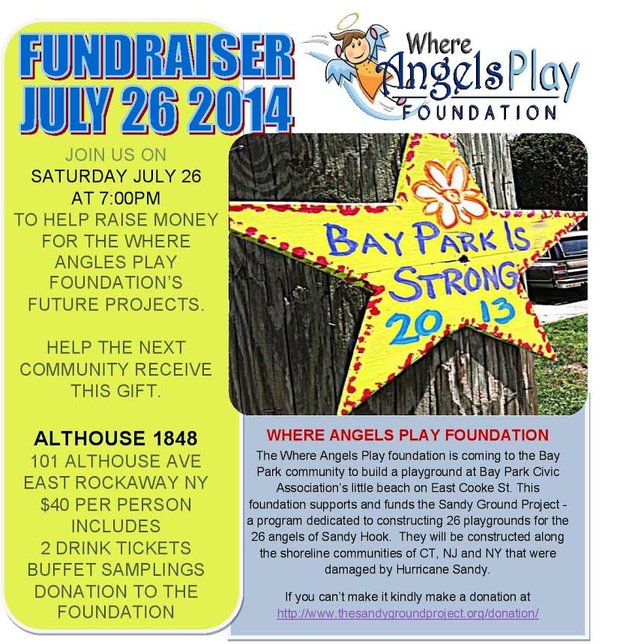 East Rockaway, NY - July 25, 2014 - The11518 is beyond humbled to announce that the Bay Park Civic Association will be blessed with a playground by the organization The Sandy Ground Project: Where Angels Play. This playground will be dedicated to a little boy named Noah Pozner, at the Bay Park Beach on E. Cooke Street. Noah's memory will live on with this playground, through the children of our community.
The Sandy Ground Project was established by members of the New Jersey Fireman’s Benevolent Association (NJFMBA), to build 26 playgrounds along the coast of New Jersey, New York & Connecticut in towns hit by Hurricane Sandy. The playgrounds are meant to honor and provide a lasting memory of the 20 children and 6 teachers in the Newtown, CT tragedy. The project's roots go back to Hurricane Katrina, after which the NJFMBA donated and built playgrounds in the gulf.
The kindness was returned years later when two Mississippi communities donated over a thousand wrapped gifts to New Jersey towns devastated by Hurricane Sandy. The Sandy Ground Project became the next step in the true spirit of paying it forward. Soon their mission will continue with the donation of playgrounds to honor the victims of the Boston Marathon bombings.
Fundraising events will take place in East Rockaway during the week leading up to the playground’s construction. A volunteer team will be building on Friday & Saturday, July 25th & 26thand the park will open with a ribbon cutting ceremony held Sunday the 27th at 11am.