DEC tours treated area with elected officials after a large infestation of Southern Pine Beetle (SPB) was discovered on the site in November of 2014. 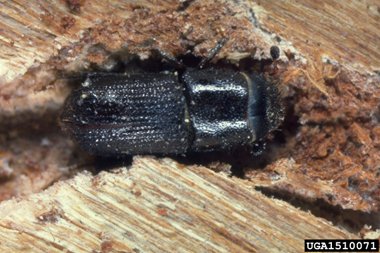 Manorville, NY - July 15, 2015 - NYS Department of Environmental Conservation's (DEC) staff toured Henry's Hollow Pine Barrens State Forest and Munn's Pond County Park today with New York State Assemblyman Steve Englebright, chair of the Assembly Committee on Environmental Conservation, and New York State Assemblyman Fred Thiele to show the successful treatment of the area after a large infestation of Southern Pine Beetle (SPB) was discovered on the site in November of 2014. This event, part of Invasive Species Awareness Week July 12-18, is designed to raise awareness about invasive species and to encourage all New Yorkers to take action to protect lands and waters from invasive species that can be harmful to human health, animal habitat, agriculture and tourism.

"DEC has worked diligently to slow the spread of Southern Pine Beetle throughout the Long Island Region," said Acting Region One Director Ajay Shah. "The work done at the Henry's Hollow and Munn's Pond location shows that if we are dedicated, we can successfully manage this new threat. I would like to thank all the municipalities, agencies and organizations, along with our elected officials, for continuing to support Southern Pine Beetle management in New York."

DEC staff cut down more than 2,000 infested pine trees to suppress the infestation this winter. After initial inspections and flyovers, the suppression effort has drastically reduced the beetle numbers and completely eliminated them from some areas. DEC also toured a SPB control site in East Quogue which has received no management and shows the widespread affect SPB can create when left untreated.

This tour, part of Invasive Species Awareness Week, is designed to raise awareness about invasive species and to encourage all New Yorkers to take action to protect lands and waters from invasive species that can be harmful to human health, animal habitat, agriculture and tourism.

DEC will focus new efforts at Rocky Point Pine Barrens State Forest where a small infestation has been identified. A team of 12 DEC forestry experts assessed the property in early June to prepare for tree thinning operations. DEC's Division of Forestry will use the information gained from this team to remove a percentage of trees throughout the state forest. This thinning operation will give the remaining trees access to more sunlight and nutrients, allowing them to strengthen and better resist the invading beetle.

"As someone who has worked to protect the Pine Barrens, the destruction wrought by the Southern Pine Beetle shocks the senses," said Assemblyman Steve Englebright. "The DEC's ongoing efforts to control the infestation and prevent further spread are substantial, rigorous and time-consuming. The new, costly environmental problem of South Pine Beetle infestation underscores the importance of the Department of Environmental Conservation's parallel initiative to meet the myriad of problems that the processes of global warming is imposing upon our state. " NYS Assemblyman Fred W. Thiele said, "I commend the Department of Environmental Conservation for their quick response efforts against the southern pine beetle. Catching an infestation early and taking the proper management procedures clearly goes a long way in helping to control the extent of damage. I look forward to working with the Department to ensure that the State has adequate resources to further protect our pine barrens from this pest."

"The Long Island Pine Barrens is an indispensable part of our region's ecosystem as it serves as a natural defense for our aquifers and drinking water supply," said Suffolk County Executive Steve Bellone. "I applaud the DEC for their continued work to protect our vulnerable resources and reduce the spread of the Southern Pine Beetle throughout our region."

"The Pine Barrens are not only a principal protector of the region's groundwater, but also a unique and precious habitat," said Southampton Town Supervisor Anna Throne-Holst. "Every level of government has invested in safeguarding its future, and we commend the DEC for its swift and effective leadership to contain the infestation of the Southern Pine Beetle," she said.

Suffolk County Legislator Robert Calarco said "I am glad to hear that the DEC has taken such proactive steps to stop the spread of the infestation and look forward to a further collaboration."

DEC, in cooperation with the U.S. Forest Service, the U.S. Fish and Wildlife Service, the New York State Office of Parks, Recreation and Historic Preservation, the Central Pine Barrens Commission and Long Island municipalities began taking steps in January to further define the extent of the SPB infestation, with several agencies also beginning tree-cutting operations in an attempt to reduced additional damage.

Research in New Jersey and other affected states has shown that SPB in the northeast typically overwinters in the pupal stage, which made this past winter season an ideal window of opportunity to combat the infestation.

SPB is considered one of the most destructive forest pests in the United States and attacks all species of pine including pitch pine, the predominant species found in the Long Island Pine Barrens. Previous to its discovery last year on Long Island, it had reached as far north as New Jersey and has devastated almost 50,000 acres of pine barrens in their state. Town, county, state and federal agencies are working together to protect Long Island's 55,000 acres of core pine barrens and the 100,000 acres of surrounding compatible growth of pine barrens which protect our sole source drinking water aquifer.

The accepted and most effective method of minimizing the spread of SPB includes cutting infested trees and thinning surrounding forested areas. Thinned forests enable individual trees to better defend themselves against beetle attacks. If untreated, SPB can move swiftly to nearby forested areas. Insecticides have been shown to be mostly ineffective against SPB, too costly to the environment and too great a threat to the sole source drinking water aquifer.

What You Can Do:

DEC urges the public to report any recently dead pine they encounter in the Long Island area, especially if there are several trees grouped together. Sightings should be reported to the Forest Health Diagnostic Lab through the toll-free information line, 1-866-640-0652 or by email. If possible, accompany any reports via email with photos of the trees including close ups of any damage. An added item in the photo for scale, such as a penny, would help with identification.

A SPB fact sheet with photos and information related to the recent areas of discovery are available on DEC's website.