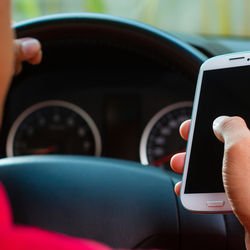 “Through this partnership, we are making the message heard loud and clear: distracted driving is reckless, potentially life-threatening and has no place on New York’s roadways,” Governor Cuomo said. “These announcements will help amplify public awareness about the dangers of distracted driving, and I thank Avis Budget Group for working with us to keep people safe. I encourage all New Yorkers to put down their phones, stay alert and drive responsibly.”

Between 2011 and 2014, the number of tickets issued in the state for texting violations increased from approximately 9,000 to nearly 76,000, a 744 percent increase. Recognition of the dangers of texting while driving has led to a number of legislative changes in New York to increase the penalties and fines imposed for violations of the state’s cell phone and texting laws.

Under current law, drivers with probationary or junior licenses or learner’s permits lose their driving privileges for 120 days after a first conviction for cell phone or texting violations; subsequent convictions within six months of license restoration result in a one year revocation.

“Across the country, 1,100 people are killed or injured by distracted drivers every day,” said DMV Deputy Commissioner Terri Egan. “It is our hope that this PSA will further educate individuals about the dangers of distracted driving so that drivers pay attention to the road instead of someone or something else. A text or call can wait until you get to your destination.”

“Distracted driving is that much more dangerous when people are driving an unfamiliar vehicle in an unfamiliar area, which is typically the case with car rentals,” said Joe Ferraro, President, Americas, Avis Budget Group. “We offer our full support to Governor Cuomo for this effort, which we believe benefits all residents of and visitors to New York State.”

The public service announcements will air on the state’s social media channels and broadcast television. For more information on the state’s efforts to combat distracted driving, contact the Governor’s Traffic Safety Committee at 518-474-5111, or click here.