Oyster Bay Town Supervisor John Venditto, together with members of the Town Board, honored eight extraordinary recipients at the 17th annual Town of Oyster Bay “Women of Distinction” Awards Ceremony. 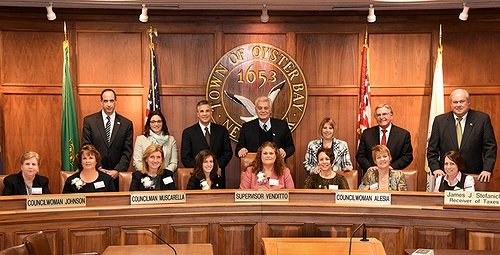 Oyster Bay, NY - April 10, 2015 - Oyster Bay Town Supervisor John Venditto, together with members of the Town Board, honored eight extraordinary recipients at the 17th annual Town of Oyster Bay “Women of Distinction” Awards Ceremony, held at Town Hall on March 24. The award recognizes the outstanding achievements of women in eight different categories, who either live or work in the Town.
“The ‘Women of Distinction’ Program has certainly proven to be a memorable tradition, honoring women who stand as role models for the younger generation in the Town of Oyster Bay,” Supervisor Venditto said. “These women are a shining example of the outstanding citizenship that has made the Town of Oyster Bay such a special place to live and raise a family.”
This year’s 2015 designees are:
ARTS
Lori Horowitz
Lori runs an art gallery in Massapequa known as Studio 5404, which helps highlight the work of local and emerging artists. Her studio provides an opportunity for both artists and art lovers to showcase and view various pieces, with the goal of displaying quality cutting edge artwork in all media. By engaging the community, Lori’s studio has served as a thriving artists’ space to share and explore artistic expression. Since its opening in June 2013, Lori’s studio has shown the artwork of over 100 artists in the tri-state area. Perhaps Lori’s most memorable show was called ‘A Brush with Sandy,’ where poets, musicians, and artists joined to recall the events of the storm.
BUSINESS
Lisa Ricciardi
Lisa Ricciardi, a successful partner in an accounting firm, specializes in advising clients in the construction industry as a Certified Construction Auditor. Her professional achievements include being named to ‘Who’s Who in Accounting,’ ‘Who’s Who in Women in Professional Services,’ and being twice named one of Long Island’s ‘Top 50 most Influential Women in Business.” She also serves as treasurer of Commerce Plaza, a non-profit that introduces school children to the corporate world. While her business profile already sets her above others, Lisa is equally well known for her vast humanitarian efforts, including her advocacy for breast cancer survivors.
COMMUNITY & CIVIC AFFAIRS
Susan Martin
Sue Martin, a lifelong and active member of her community, currently serves as President of the Chamber of Commerce of the Massapequas. For many years, she has volunteered her professional talents and skills to ensure the integrity of the organization. As a non-profit business with over 300 members, Susan also represents the Chamber throughout the community, has co-chaired some of the chamber’s most successful events and continues to direct much of her energies toward ensuring that the needs of small business owners are voiced. She was named last year’s ‘Small Businessperson of the Year,’ as she personifies the qualities of an innovative, insightful and strong leader. In addition, Susan has donated much of her time and resources to support the work of many charitable organizations, including YES Community Counseling Center.
EDUCATION
Kim Conger
Kim Conger is the Curriculum Associate for Pupil Personnel Services at the Jericho School District. Described as a compassionate and dedicated educator, Kim goes above and beyond to help secure a positive future for children with special needs. Believing in the mission of early intervention, Kim works tirelessly to help build the foundation for children under her care, so that they may flourish into outstanding adults with promising futures. She is recognized by the parents of her students as an individual who does not judge a child who was ‘different,’ but rather seeks to understand the child in order to provide a unified philosophy of care and education capable of fostering the social, emotional and cognitive growth they desperately need in order to secure prospects for a positive, bright and successful future. Kim is a dedicated, involved, and nurturing professional to both the children she services, as well as their parents.
GOVERNMENT
Felicia Schneberg
Felicia became an educator for the Nassau County Department of Drug & Alcohol Addiction in 1982 and immediately began to start chapters of SADD or Students Against Drunk Driving in every school district in Nassau County (and eventually state-wide). For 25 years, Felicia coordinated a network of hundreds of schools, ran yearly conferences, sent out quarterly newsletters, held safety walks, and helped expand the concept of what SADD stood for by helping to change the name nationally to Students Against Destructive Decisions. She has served as the chairperson for the Tobacco Action Coalition of Long Island and has worked with state agencies in an effort to bring communities together to combat the scourge of drug addiction. Through her efforts, Felicia has helped countless young people learn the importance of taking care of themselves and their bodies while learning about the hazards of drinking, smoking and other ‘destructive decisions.’
HEALTH SERVICES
Dr. Erna Busch Devereaux
Dr. Erna Busch-Devereaux is the chief of breast surgery at Huntington Hospital and Assistant Professor of Surgery at Hofstra North Shore LIJ School of Medicine. At Huntington Hospital, Dr. Busch-Devereaux serves on the Cancer Care Quality Subcommittee and the Cancer Committee. She is the Breast Program Leader for the NAPBC Certification Program as well as the Moderator of the Breast Tumor Board at Huntington Hospital. Additionally, she is a frequent lecturer on various surgical topics and provides breast cancer education to patients and their families as an expert on numerous panels and lectures.

Dr. Busch-Devereaux is widely published in professional books, poster presentations and abstracts presented at professional societies. She has dedicated her professional life to treating breast cancer and educating professionals and laypersons about the disease and its treatment.
HUMANITARIAN
Karen Wiking
Karen Wiking is the Director of Christian Education at St. Luke’s Lutheran Church in Farmingdale. Described as a selfless individual, Karen puts the needs of others before her own, and has consistently met the needs of the Farmingdale community for over 20 years. She initiated a women’s program known as ‘WINGS,’ which has involved a group of over 50 women in various community outreach efforts. Among her many benevolent efforts include the organization of food and clothing drives, the creation of educational opportunities and scholarships for girls in Africa, and help for victims of disasters such as Hurricane Sandy. Karen goes above and beyond her duties, serving as a wonderful leader and example of service and charity.
VOLUNTEER
Marie Dunker
Marie Dunker is actively involved in many community organizations and their respective events. As a Columbiette for the Knights of Columbus, she volunteers for their numerous functions. She is an active member of the Hicksville Gardens Civic Association, and serves as Block and Board Captain, as well as serving on many of the organization’s committees. Her efforts on the Jerusalem Avenue Committee in her hometown of Hicksville has helped improve the safety of the roadway, including the addition of a new traffic light near a school intersection; as a member of the Green and Beautification Committee she has worked to cleanup various streets in the Hicksville area; she assists in the holiday decorating at Kennedy Triangle near the LIRR station; and helps distribute American flags to many homes in the area as part of her work on Memorial Day Flag Distribution Committee.