SCPD Officer Who Helped Save Newborn Chosen as Baby’s Godfather

The family, who feels a special bond with the officer, decided Officer Negron would be the perfect person to fill the role as godfather. 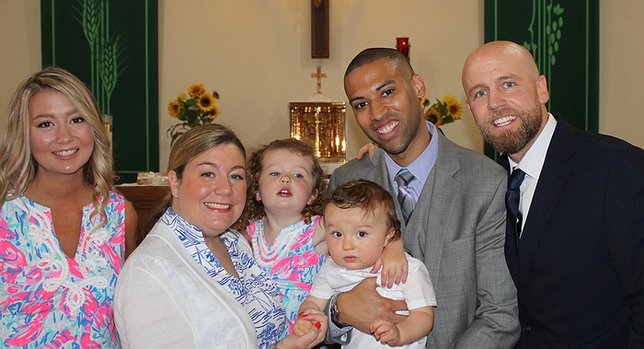 Mount Sinai, NY - July 2, 2018 - A Mount Sinai family has chosen a Suffolk County Police officer, who administered aid to their newborn who was not breathing after his unexpected delivery in their home, to be their son’s godfather.
Jane and Mike Pappalardo first met Sixth Precinct Police Officer Jon-Erik Negron on August 22 when he responded to their home after Jane went into labor in the family’s home. Baby Bryce was delivered by his father but was not breathing, and the umbilical cord was wrapped around his neck. Even after his father removed the cord, the newborn still hadn’t taken a breath. Officer Negron used a plastic syringe from the family’s kitchen to clear fluid from Bryce’s airway, activating the baby’s breathing.
The family, who feels a special bond with the officer, decided Officer Negron would be the perfect person to fill the role as godfather.
“He’s been there for Bryce since his first breath,” Bryce’s father Mike Pappalardo said. “He’s just so genuine and asked us to keep in touch with him to let him know how Bryce is doing. It made us think, you know what, we want him in his life.”
He continued, “Before even asking him to be the godfather, we felt like he already was. It was an easy choice. We were just hoping it would be ok with him and when we asked him, he said he was blown away and would be honored. We were honored he would agree to be Bryce’s godfather. We consider Jon-Erik family now.”
“We have always had a connection,” said Officer Negron, who speaks weekly with the family. “I’m just happy to play a role and I’m happy to always be there and always help because I know Bryce is going to grow up to do great things.”
“We are so grateful that baby Bryce is healthy and thriving due in part to our first responders,” Suffolk Police Commissioner Geraldine Hart said. “I would like to congratulate Officer Negron on the honorable role of godfather. Bryce is lucky to have Officer Negron is in his life as a wonderful role model.”
Officer Negron was bestowed the honor during Bryce’s christening on June 23 at Infant Jesus Roman Catholic Church in Port Jefferson.
“I don’t know if Bryce would be here if it wasn’t for his quick thinking and knowledge,” Mike Pappalardo said. “He’s emotionally connected to Bryce and he truly cares about him and what happens in his life. It’s a great relationship. Jon-Erik and Bryce have a special connection that will last a lifetime.”
Officer Negron has been a Suffolk Police officer for four and a half years and playing a role in a baby delivery never crossed his mind when he thought of becoming a police officer.
“This superseded anything I imagined on having an impact as a police officer,” he said. “This is probably the most meaningful thing that will happen to me on this job and it exceeded all expectations.”
Several months ago, the Pappalardos publically thanked Officer Negron as well as Sixth Precinct Officer Ferdinando Crasa, Fire Rescue and Emergency Service Dispatcher Steve Platz, SCPD Public Safety Dispatcher Jonathan Eck, for their efforts during the delivery.
“Congratulations are in order to Officer Jon-Erik Negron for not only saving the precious life of baby Bryce Pappalardo, but for now taking on the role of his godfather,” Suffolk County Executive Steve Bellone said. “I am truly thankful for all first responders out there like Officer Negron and it warms my heart to see their tireless work appreciated in this sincere act of gratitude.”