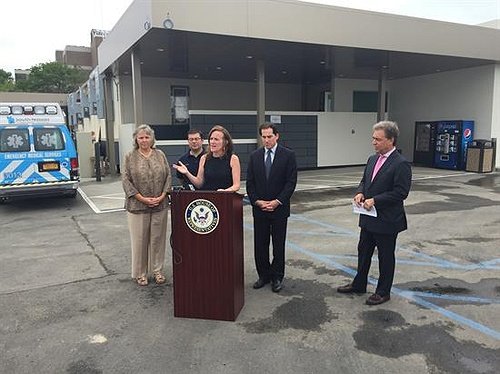 Long Beach, NY - July 1, 2015 - U.S. Representative Kathleen Rice today called on the Centers for Medicare and Medicaid Services (CMS) to approve South Nassau Communities Hospital’s request to open and operate a 24-hour Emergency Services Department in Long Beach, which has been without an Emergency Department since the Long Beach Medical Center was forced to close due to damage from superstorm Sandy. Meeting a July 1st construction goal, South Nassau has completed an $8 million project transforming the Long Beach Urgent Care Center into a facility that can serve as Long Island’s first free-standing 24-hour Emergency Department and receive ambulances through the 911 system. South Nassau had hoped to open the Emergency Department before July 4th, but cannot do so without federal approval. South Nassau’s application was endorsed by the New York State Department of Health, but has not yet been approved by CMS.

“There is no reason Long Beach should have to go another summer without an Emergency Department,” said Representative Kathleen Rice. “There is a dire need for an Emergency Department in the aftermath of Sandy, and I welcome officials from CMS to come here and see for themselves that this facility is ready to provide the high-quality, round-the-clock care that the people of Long Beach deserve. We will keep working to get this facility open and fully operational as soon as possible.”

"Since ‎Superstorm Sandy, the Long Beach community has been without emergency service and we prioritized this project to close that gap, especially as we head into the summer season,” said U.S. Senator Kirsten Gillibrand. “The federal agencies should grant this waiver so we can bring this center online."

“As survivors of superstorm Sandy, we in this community have had our fill of red tape,” said New York State Assemblyman Todd Kaminsky. “We cannot permit bureaucracy to stand in the way of us having access to the emergency room we deserve and which we have been waiting for far too long.”

“It’s very frustrating not to have our emergency room and I applaud both Representative Rice and Assemblyman Kaminsky for leading the call to finally get this facility open,” said Nassau County Legislator Denise Ford.

"This project was completed in record time," said South Nassau's President & CEO, Richard J. Murphy. "We hope the Long Beach community will continue to use the Urgent Care Center while we undergo these additional regulatory reviews, which are required before we can open as a full-fledged, off-campus Emergency Department. Our goal is to open as an Emergency Department as soon as we are legally able to do so."