Rolls Out Top Four Priorities to Clean up Nassau’s Finances and Save Taxpayer Dollars. 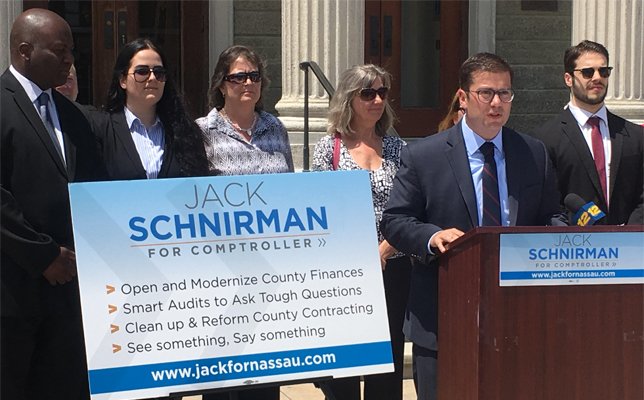 Mineola, NY - June 27, 2017 - Jack Schnirman, Democratic candidate for Nassau County Comptroller, today unveiled his top priorities to modernize the office of the Nassau County Comptroller. These priorities will bring independence and efficiency to the office while ending the culture of corruption and cronyism that has destroyed Nassau County finances.
Applying the same principles he brought as Long Beach City Manager to turn that city's finances around from near bankruptcy to surplus, Schnirman will institute best practices, beginning with a transparent office that serves taxpayers before political insiders.
“The Nassau County Comptroller’s office must be independent and fact based – we will take a clear-eyed look at the County’s finances, end the accounting gimmicks, and be honest about the difference between a deficit and a surplus," stated Schnirman.
The priorities Schnirman announced start with opening up and modernizing county finances to bring Nassau County up to speed with the best practices from around the country.
It is imperative that we improve Nassau’s D+ grade for transparency, given by the Long Island Press and the Press Club of Long Island.
"When I am Comptroller, we will set a new bar for openness by displaying our financial information with modern, user-friendly, searchable technology accessible to all our residents." Secondly, Schnirman will conduct aggressive audits, ask the tough questions and follow the money. Schnirman will audit the high value areas to determine where there is waste, fraud and abuse. He committed that one of his first acts as Comptroller will be to reestablish the Independent Audit Committee/Audit Advisory Committee. "It's a tenet of the comptroller's office to make sure we get the most out of tax dollars and conducting aggressive audits is one way to do that," said Schnirman.
The other two priorities Schnirman announced are to clean up and reform the county contracting process and to create an environment where residents can say something if they see something. What has occurred in Nassau County in recent years makes clear that DA Madeline Singas’ special report got it right – Nassau’s contracting system is ripe for malfeasance and corruption and cries out for reform.
“As Comptroller, I will partner with our District Attorney and together we will work to finally implement the reforms her office outlined two years ago.”
"I want the people of Nassau to engage with our office. If they see a department or county program or facility that should be audited, I want them to tell me.
"Government works best when residents work with us to make sure every tax dollar is used appropriately and efficiently," remarked Schnirman.
As the Long Beach City Manager, Schnirman has a long history of turning around failing finances, promoting efficient government practices and eliminating waste.
"In November, Nassau residents will have a real choice as they pick their next Comptroller - the priorities I laid out today will make that choice even more clear," said Schnirman. "We are going to bring back financial controls to the Comptrollers office."
As Long Beach City Manager, Jack Schnirman brought the city back from the brink of bankruptcy and led the recovery effort after the devastation of Superstorm Sandy. Jack is a career professional who has a record of ending cultures of corruption and fixing government finances.