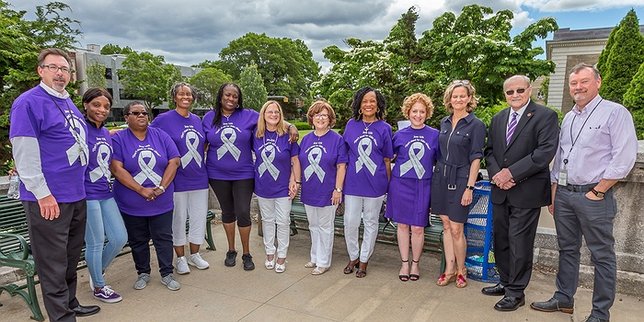 Mineola, NY - June 22, 2018 - Nassau County Executive Laura Curran recently joined with Nassau County Police Commissioner Patrick Ryder, Nassau County Department of Social Services (DSS) Commissioner John E. Imhof, DSS Adult Protective Services Director Sarah Smith, District Attorney Madeline Singas and Assistant District Attorney Arlene Markarian, Unit Chief of the District Attorney’s Elder Abuse Unit, to recognize World Elder Abuse Awareness Day [WEAAD].
“Nassau County is committed to ending elder abuse of all forms be it physical, sexual, neglectful, exploitation or abandonment,” said County Executive Curran. “Elder abuse affects both men and women of all ethnic backgrounds and crosses all socio-economic groups. World Elder Abuse Awareness Day is meant to bring global awareness that elder abuse is a social issue which impacts every community.”
The most common elder abuse reports received by Nassau County are neglect by caregiver and financial or other exploitation. These account for more than half of the cases investigated.
Other common situations involve adults who neglect their own basic needs, are unable to manage their finances or engage in self-endangering behaviors, such as over or under medicating oneself or have signs of untreated mental health issues.
“County Executive Curran has resumed the Family Violence Task Force and is committed to ensuring the wellbeing of Nassau County’s vulnerable adults,” said Social Services Commissioner Dr. John E. Imhof.  “Participating in World Elder Abuse Awareness Day is a reminder that adults are being abused and neglected and we need to do our part to ensure their safety and well-being.”
WEAAD was first observed in 2006 by the International Network for the Prevention of Elder Abuse and the World Health Organization as the United Nations and has been observed annually ever since.
According to the United Nations, the world will see a significant increase in the number of older persons over the next 12 years and by 2050, the number of people over 60-years-old will exceed the number of younger people. As a result, it is expected that elder abuse will also increase. Although an overwhelming number of cases of elder abuse, neglect and exploitation continue to go unreported each year.
“Nassau government is united in our commitment to prevent and stop elder abuse in our communities, and the DA’s office has a dedicated unit to help seniors who have been victimized by abuse, neglect or other crimes,” said District Attorney Singas. “Every senior deserves to live with dignity and to receive the care and support they need. We cannot allow victims to suffer in silence, so if you are a victim of elder abuse, or you know someone who is, please call our Elder Abuse Hotline at (516) 571-7755 or in an emergency, call 911. We are here to help.”
For additional info: https://www.acl.gov/news-and-events/events-and-observances/world-elder-abuse-awareness-day.