Donato Panico served first responders at Ground Zero in the aftermath of 9/11. 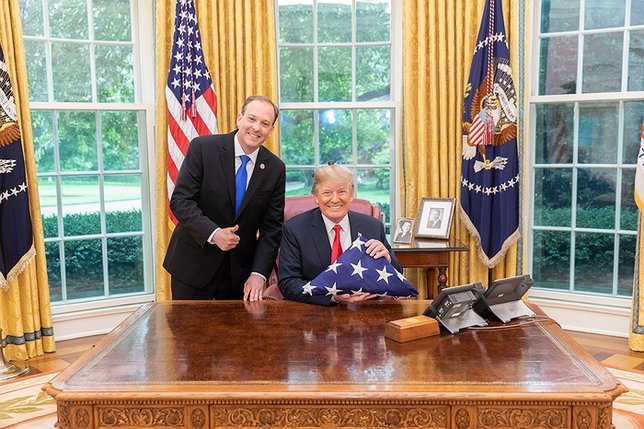 Long Island, NY - June 21, 2018 - Congressman Lee Zeldin (R, NY-1) presented yesterday the flag of local Smithtown resident Donato Panico to President Trump, per Donato’s request, in the Oval Office.
“In the aftermath of 9/11, Donato Panico drove from his deli in Smithtown to Ground Zero to feed the many first responders who for weeks and months searched through the rubble for the loved ones of so many,” said Congressman Zeldin. “In thanks for his service to these first responders, one of them gifted this flag which flew on one of the surrounding buildings. Knowing this flag wasn't his, but rather a part of history, Donato sent the flag to Iraq with a local deployed serviceman who he instructed to bring back the flag when he returned home safe. After flying the flag over his camp in Iraq, he returned home and returned the flag to Donato. This year, Donato joined me as my guest for the State of the Union in honor of his commitment to our first responders and our community. While in Washington, he asked me to give this flag to President Trump, which I had the opportunity to do in the Oval Office. Donato is who we aspire to be as New Yorkers and as Americans, and this flag is a symbol of his service, the service of our brave servicemen and women and the so many lives lost on that tragic day. Today, Donato continues to dedicate his life to our community's first responders through his foundation, Heros 4 Our Heroes, which aims to feed Long Island's first responders in thanks for their service. Thank you Donato for everything you have done for our community and our nation!”
In recognition of his service to our community and first responders, Donato Panico was Rep. Zeldin’s guest for this year’s State of the Union address. In traveling to our nation’s capital, Donato brought his flag with him and discussed it during an episode of Live: Lee in DC. He requested Rep. Zeldin present the flag to President Trump.