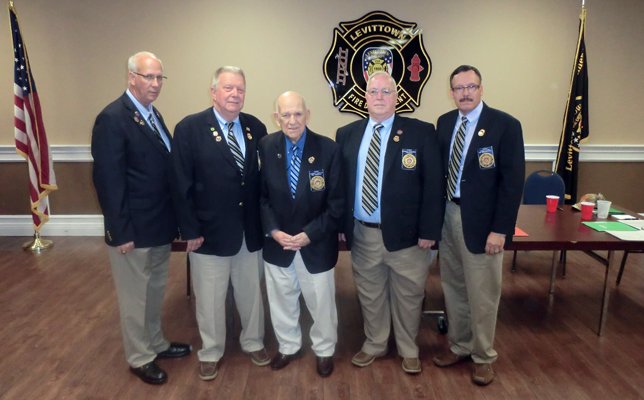 FASNY has named Tom Cuff (center) as the 2017 recipient of the their Fire Achievement Award.

Levittown, NY - June 21, 2017 - The Firemen’s Association of the State of New York (FASNY) has named Tom Cuff, a 64-year member of the fire service and longtime Levittown Firefighter, as the 2017 recipient of the FASNY Fire Achievement Award.
This statewide honor recognizes Cuff’s efforts for more than six decades to fight for added safety measures in construction, such as residential sprinklers and changes in national codes and standards that have helped better protect millions of residents in New York and across the country. In addition, Cuff has been a staunch advocate for enhanced firefighter death benefits and has helped countless grieving families of fallen heroes help navigate the process of obtaining the benefits owed to them as a result of their loved one making the ultimate sacrifice.
“Tom has been working non-stop for more than 60 years to put the safety and needs of his fellow firefighters and their families front and center,” said FASNY President Ken Pienkowski. “I can’t think of anyone more deserving of this recognition. It is my pleasure to announce Tom Cuff as the 2017 FASNY Fire Achievement Award winner.”
Tom Cuff began his volunteer fire service career in 1953 when he joined the Garden City Fire Department. In 1961, he settled down with his wife Jane and became a member of the Levittown Fire Department. He has held a number of leadership positions in the fire service over the years, including Captain of Levittown Ladder Company 1, Fire Department Secretary, Fire Department Treasurer, and 20 years as Levittown Fire Commissioner.
In addition, his service has extended to include President of the Nassau County Firemen’s Association, President of the South Shore Fire Departments Association, President of the Southern New York Volunteer Firemen’s Association, and finally as FASNY President; where he led efforts on behalf of the State’s 110,000 volunteer firefighters.
With a degree in Business Administration from Adelphi University and experience in engineering and other disciplines at LILCO, Tom brought a slightly different perspective to the volunteer fire service. He often studied and investigated new laws that provide firefighter benefits. When Congress enacted the Public Safety Officers’ Benefit Act (PSOB) in 1976, most in the fire service paid little attention as Washington was still recovering from Watergate. Thankfully, Tom was already researching this new benefit for firefighters.
For more than three decades, Tom has helped families of deceased firefighters across New York State successfully navigate the federal Department of Justice’s paperwork and procedures. He even keeps a pre-formed set of documents he designed himself on his home computer, helping him quickly and efficiently start this process after each fatality. (The National Volunteer Fire Council published and nationally distributed a guide authored by Tom on how to file a PSOB claim that included these documents.)
In addition, Tom has been a leader in the charge for the passage of residential sprinkler requirements and has been involved with national codes and standards. He led a group of fire service experts to push the requirement that hotels display room numbers and fire exits one foot from the floor – ensuring that both guests and firefighters can orient themselves while navigating smoky hallways.
It is in recognition of all of these accomplishments that Tom Cuff is named FASNY 2017 Fire Achievement Award Winner.
About FASNY
Founded in 1872, the Firemen’s Association of the State of New York (FASNY) represents the interests of approximately 110,000 volunteer firefighters and emergency medical personnel in New York State.  For more information, visit www.fasny.com.