The man stole money from the cash registers after smashing the glass front door. 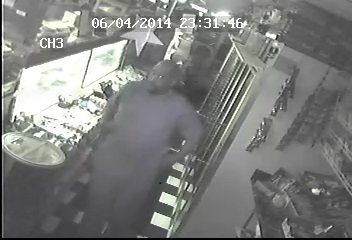 Huntington, NY - June 19, 2014 - Suffolk County Crime Stoppers and Suffolk County Police Second Squad detectives are seeking the public’s help to identify and locate the man who burglarized a deli in Huntington this month.
A man smashed the front door glass of Critic’s Choice Delicatessen, located at 1153A Jericho Turnpike, on June 4, 2014 at approximately 11:10 p.m. Once inside, the man stole money from the cash registers.
A witness observed the man fleeing in a dark colored Nissan Murano with one black rim on the front passenger side, possibly a spare tire. The suspect fled southbound on Deer Park Avenue from Jericho Turnpike.
The suspect is described as a heavyset black male, balding, with a goatee.