Officers responded to a 911 call of a boat sinking in Fire Island Pines Harbor at approximately 1 a.m. 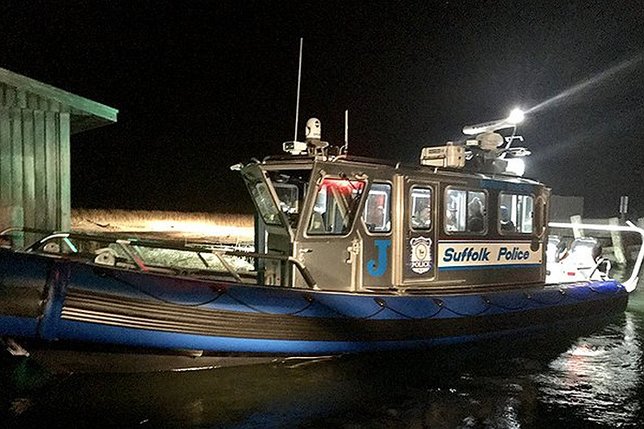 Suffolk County Police Marine Bureau officers recently rescued two men from a sinking 25-foot sailboat in Fire Island Pines Harbor.
Police Officers William Houst, John Mullins, Michael Klarmann and Steven Squires, onboard Marine X-Ray, responded to a 911 call of a boat sinking in Fire Island Pines Harbor at approximately 1 a.m.
The lines on the sailboat broke and were being smashed against the dock and other boats.  Chris Sinforter, 32, of Brooklyn, and Christian Teneyck, 37, of Jersey City, were onboard the sinking sailboat and unable to get off safely due to high seas.
Officers maneuvered Marine X-Ray next to the sailboat and helped the two men to jump safely to the rescue boat at approximately 2:30 a.m.
Officer Squires sustained minor injuries while catching the victim jumping from his vessel. He was transported to South Shore University Hospital in Bay Shore for treatment. Sinforter and Teneyck were uninjured.