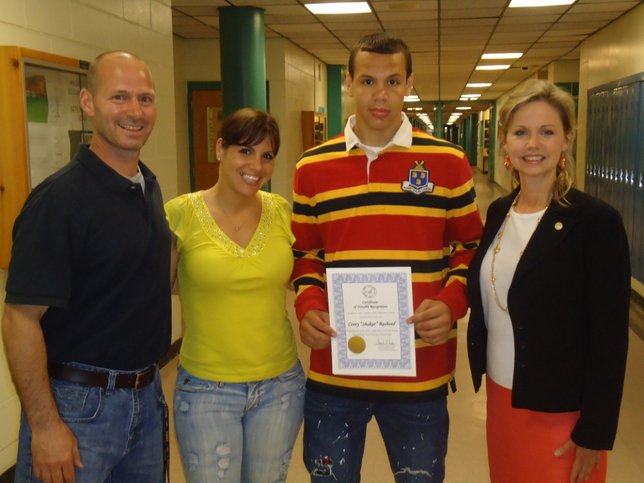 Middle Island, NY, May 2013 – Suffolk County Legislator Sarah Anker recognized Longwood School District wrestling champion Corey (Shakur) Rasheed at the Longwood Board of Education meeting held on Thursday, May 23. Corey placed first in his weight class at the National High School Wrestling Championships which were held this past April.

“As a student athlete, Corey has demonstrated his dedication to achieving his goals,” said Legislator Anker. “His dedication and talent is admirable, and will serve as an inspiration for younger athletes in his community.”

Corey placed first at the 24th Annual National High School Wrestling Championships in the 152 lb. weight class. The national championship win followed his state championship victory in mid-February. In the past, Corey has placed in the State Finals three times, but this year was his first time as a titleholder. Those who know Corey boast about his immeasurable drive and ability that he will carry with him into his senior wrestling season and beyond.