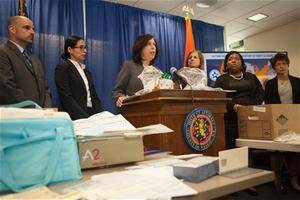 Mineola, NY - May 15, 2015 - Acting Nassau County District Attorney Madeline Singas joined the United States Postal Inspection Service today to announce the arrest of a Freeport woman accused of stealing the identities of hundreds of people across 31 states in order to fraudulently obtain hundreds of thousands of dollars.

Seerojnie Ram, a/k/a Seerojnie Mohan, 47, of Freeport, was arrested on May 13 and arraigned yesterday before Nassau District Court Judge James Darcy on the following charges:

“The evidence of identity theft and financial fraud uncovered in this case is staggering – and serves as a wake-up call for anyone who is not already aware of this widespread and growing sector of illegal activity,” Acting DA Singas said. “Identity theft schemes do not stop at Nassau’s borders, which makes my office’s partnership with the U.S. Postal Inspection Service all the more important as we fight to protect the public from the lasting damage these scams can inflict on victims.”

“Ms. Ram knowingly used information from stolen identities for her personal gain, while leaving a trail of destruction for her victims. Postal Inspectors and their law enforcement partners put a stop to her criminal enterprise by bringing her to justice for her illegal activities,” said United States Postal Inspection Service Acting Inspector-in-Charge Claudia Angel.

“Our pursuit of criminal tax preparers does not end on April 15, when the personal income tax filing period ends,” added Executive Deputy Commissioner of the New York State Department of Taxation and Finance Nonie Manion. “Our battle against tax fraud is a year-round effort, and we’ll continue to work with law enforcement agencies throughout the state to prosecute cases such as this one.”

Acting DA Singas said that between Oct. 1, 2013 and May 13, 2015, Ram fraudulently submitted over 200 personal income tax returns for the tax years of 2013 and 2014 electronically to the Internal Revenue Service, the New York State Department of Taxation and Finance, and the West Virginia State Tax Department.

In order to get direct deposit of refunds from the IRS, Ram set up Green Dot pre-paid credit card accounts in Texas, Kentucky, Maryland and West Virginia, as well as New York.

In addition to larceny and offering false instruments in connection with these schemes, defendant was also charged with forging documents ranging from U.S. Postal Service Change of Address forms to IRS Change of Address forms to official documents such as Social Security cards. Among the hundreds of credit cards and debit cards seized by investigators from Ram’s Freeport home were numerous forged documents, including a high school diploma.

Investigators also found several computers, and numerous notebooks filled with personal and financial information and tax refund amounts. Investigators also found proof of U.S. Postal Service and IRS change of address forms so that tax refunds, credit cards, debit cards, checks and other items would be directed to addresses under the defendant’s control. There were also checkbooks in names other than the defendant.

Ram used various identities including dead people, disabled people, and those on employee or customer lists obtained from various companies, including a cell phone company. She possessed more than 500 identities of real persons from these sources. Notebooks discovered at Ram’s home were found to contain pages of information about deceased persons.

Records show that Ram spent money obtained through this scheme for trips to Atlantic City, for cruises, and to furnish her home. She often used postal money orders to conceal money flow – for example, paying the lease on her 2015 BMW X6. Despite hundreds of thousands of dollars of money being moved through her accounts, Ram filed for bankruptcy in 2015 and even received Medicaid benefits.

Identity theft using the stolen identities of deceased people is known as “ghosting.” Every year federal and state taxing authorities suffer millions of dollars of losses as a result of fraudulent tax returns filed in the names of deceased persons. The U.S. Social Security Administration sells its “Death Master File” to local governments, hospitals, pension funds and private companies. Because it is public information, any buyer can post the Death Master File online or pass it on to others.

Inspectors with the U.S. Postal Inspection Service discovered the scheme when it became known that mail in the name of many different individuals was being sent to the same address. The USPS then referred the case to the DA’s office for investigation, with assistance by the New York State Department of Taxation and Finance.