Sini: "We are no longer responding or waiting for tragedy to strike; we are taking a proactive approach." 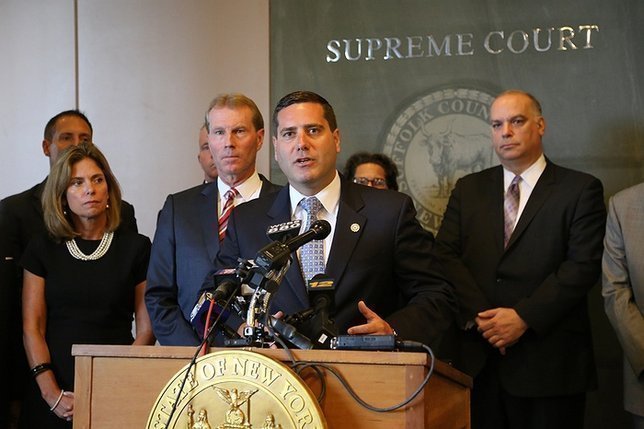 Suffolk County District Attorney Timothy D. Sini and Homeland Security Investigations (“HSI”) New York announced the indictment of three 18th Street gang members for allegedly conspiring to murder two individuals they believed were MS-13 gang members.
“This is one of many cases where my office and HSI worked together to not only bring bad actors to justice, but to actually prevent violence,” District Attorney Sini said. “We are no longer responding or waiting for tragedy to strike; we are taking a proactive approach, and due to excellent law enforcement work, we are preventing murders.”
Wilber Campos Chicas, a/k/a “Troya,” 25, of Port Jefferson Station; Guillermo Linares Alvarez, a/k/a “Extrano,” 19, of Huntington Station; and Isidro Aguirre Canelas, a/k/a “Chino,” 26, of Centereach, are each charged with one count of Conspiracy in the Second Degree, a B felony.
Campos Chicas and Aguirre Canelas have been identified by law enforcement as members of the Tiny Locos (TLS) clique of the 18th Street gang, which is based in Port Jefferson Station, and Linares Alvarez has been identified as a member of the Shatto Park Locos (SPLS) clique, located in Huntington Station.
An investigation by the District Attorney’s Office and HSI that began in March revealed intelligence that Campos Chicas, Linares Alvarez and Canelas allegedly conspired to murder two victims who they believed were members of MS-13, which is 18th Street’s rival gang.
Between March 15 and April 24, the defendants allegedly took several steps in furtherance of the murder conspiracy, including sharing photos and descriptions of the two targets and their whereabouts. The defendants were allegedly going to use two machetes, which were owned by Linares Alvarez, to murder the two victims. They also allegedly discussed obtaining a car to use while carrying out their attacks.
The three defendants, all of whom entered the United States illegally, were apprehended by HSI agents in April.
“Working quickly, HSI was able to take all three defendants into custody before they were able to execute their plan,” District Attorney Sini said. “But for the dedication and professionalism of HSI, these murders likely would have occurred.”
“HSI and Suffolk County will not stand for violence at the hand of any gang member,” said Gerald Handley, Assistant Special Agent in Charge of HSI New York. “Whether the intended victim is innocent or a known member of a gang, we pay the same attention to the details and remain as proactive as possible to stay in front of the violence. We will stand united with our law enforcement partners and continue to arrest and seek prosecution of gang members.”
The three defendants were arraigned on the indictment on March 13 by Suffolk County Acting County Court Judge Karen M. Wilutis and were remanded without bail.
If convicted of the top count, the defendants each face a maximum sentence of eight and one-third to 25 years in prison. Campos Chicas is due back in court on May 29. Linares Alvarez is due back in court on May 30. Aguirre Canelas is due back in court on May 31.
“Today is the latest example of Suffolk County law enforcement using the conspiracy statutes under New York State law to prevent violence,” District Attorney Sini said. “We are collecting intelligence, analyzing that intelligence and disseminating it in a way that is allowing us to prevent violence and hold dangerous gang members accountable. None of this would be possible without the partnership between my office and HSI as well as other law enforcement agencies.”
A criminal charge is an accusation. A defendant is presumed innocent until and unless proven guilty.