Fun in a inflatable bouncy house left two young boys hospitalized and a young girl with scrapes after it went airborne. 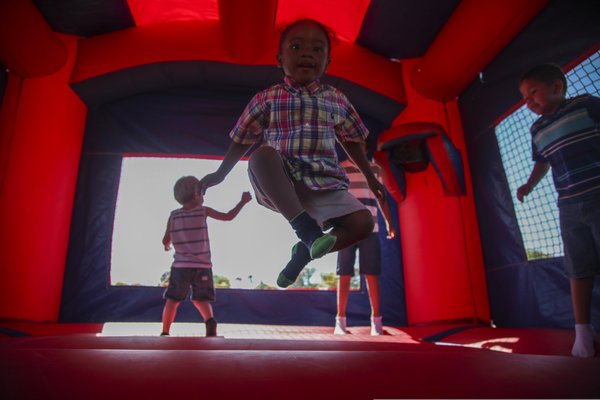 The sight of an inflatable bounce house will have most kids running to it in joy, but for three children in upstate New York it may be different story after theirs blew away on Monday afternoon.

Three children – ages 5, 6, and 10 – were  playing in a bounce house in front of a townhouse in South Glen Falls when the wind lifted it into the air. The bounce house went up as high as 50 feet before dropping one boy on to a parked car and another boy on asphalt. A young girl suffered minor scrapes.

The 10-by-10-foot bounce house toy was secured to the ground with spikes, but the wind gust was strong enough to uproot it.

The two boys were airlifted to the hospital after a fall of about 20 feet high. The boys have remained hospitalized as of Tuesday morning.

The bounce house was eventually found in a field behind a middle school. It floated several hundred yards away and over a stretch of woods.

In a nationwide study several years ago that was published in the journal Pediatrics, it showed injuries related to bounce houses were on the rise.